Raid on the Blucher - Teaser/Scenario

Our annual birthday gaming fest quickly approaches, and this year as well as a Memoir '44 campaign set during the Normandy Campaign, I'm going to run a Full Thrust scenario.
I've written it so that deployment is relatively free but also secret.

Raid on the Blücher

The NSL Battleship Blücher was damaged during a battle against the Romanov Hegemony deep in the Nu Phoenicis system. It’s been hidden in the asteroid belt to undergo repairs before it can return to the undeclared border war.

A raid has been launched by a newly-detailed Romanov squadron to destroy the Blücher. But this raid finds the Blücher hidden off-radar and attached to an asteroid, with strong patrols surrounding it. 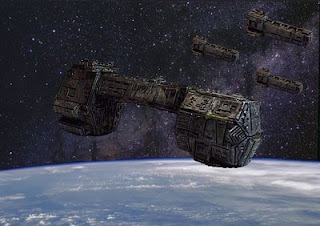 Players alternately place 5 asteroids on the board, starting with NSL player. These must go in the marked Asteroid Zones, with no more than two in any one of the zones. These asteroids move 2” per turn in a D1-A4 direction.

Neu Swabian League player randomly determines which of asteroids in Asteroid Zones the Blücher is anchored to.
This is kept secret until:
a) Blücher detaches from asteroid
b) Blücher’s Firecon is successfully brought online
c) A Romanov vessel comes within 6” of the asteroid

The Blücher begins the game anchored to an asteroid, and moves with it until it detaches.

No systems are functional at the beginning of the game.
Some systems are damaged and some were taken offline for safety purposes.

At the end of each turn the systems can be brought back online. There is a further chance of damaged systems failing.

In cases where damaged systems are used, the system will fail again on a 1 or 2. A “1” means that the system fails before use, and a “2” means it fails after use.
Posted by Donogh at 19:07