In 1913 a French expedition led by the eminent Dr. Gaspard de Châteaubriant left Abomey seeking evidence of native folklore detailing a new species of animal. Similar to stories from The Congo of "Mokole", de Châteaubriant was preparing to go to the Royal Academy of Sciences with evidence of his startling discovery from the northern reaches of Dahomey.
Heading up the River Alpouro to its source in the central highlands by means of riverboat, the expedition was expected to winter there and return before the rainy season in March. 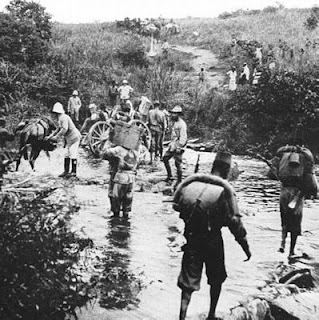 They were declared missing in July, but The Great War intervened as the German colonies of Togoland and Kamerun were invaded by the British and French.
In 1917, a junior member of the expedition, driven insane by Malaria or some other tropical disease turned up in Parakou with stories of the expedition's fate, but no rescue mission was possible until after the war.

By 1920, not one but two rival expeditions were ready to discover the fate of Gaspard de Châteaubriant:
Led by the dashing Commander Abraham Simpson D.S.O., a grizzled group of British veterans marches upriver, armed with Lee Enfields and aided by their trusty native porters ...
Meanwhile Playboy millionaire H. Jack Vanderbolt embarks with a disparate bunch of adventurers, replete with the wonders of this new mechanical age... 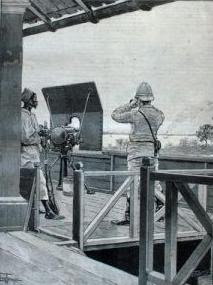 Through treacherous savannah and uncharted jungle these brave souls must strive.
What terrible secrets does the Dark Continent hold? What perils lie in wait?

The Dahomey Expedition is a skirmish wargame in the best traditions of pulp adventure. Take control of the brave explorers as they fight their way through the terrible dangers of the dark continent...

Gaelcon 21 will be running from October 24th to 26th at D4 Hotels, Ballsbridge, Dublin 4
View Gaelcon's website here
Posted by Donogh at 11:33