Skip ran this game at Ambush Alley Ireland Day a couple of weeks ago. The combined airborne and mechanised Soviet force must take control of the town, targeting the Mujahideen headquarters specifically. 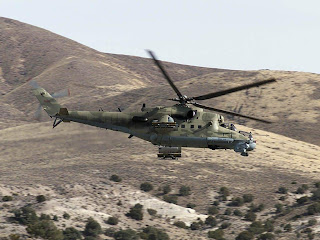 Mechanised regulars move through the pass and into the town. The BMPs add a lot of firepower to the three squads but they've got to be careful that one hit to the lead vehicle doesn't block the entire road for the rest. Airborne advance into tower overlooking town. From that tower the squad can go on overwatch over most of the town, and can support the other two squads as they make their way down from the wooded ridge. First BMP takes fire from the first Mujahideen group in the outskirts of the town. Airborne take tower; immediately they're fired upon by a heavy machine gun at the far side of the town, but their return fire wipes out that position. The second Airborne squad move through wood on ridge to the left of the tower. They had thought that their route was hidden from the town, but accurate fire from rooftops takes them down. [Skip was very aware of the corridors of fire from his force's rooftop positions] One of the BMPs moves onto ridge to support the faltering Airborne advance. Taking fire from several Mujahideen groups inside the town, the Soviet Regulars take cover to the left of the road. The lead BMP fires directly into the yard of the first Mujahideen stronghold. Regulars get ready to move up to roof. From there they'll prove to be the bane of many a Mujahideen group attempting to stymie the Soviet attack. Two BMPs are knocked out by RPG fire: now the Regulars are left without support. On the rooftop to the rear of the combat zone, Afghans spot for a Mortar. Room to Room fighting takes place. The Soviet Regulars have advanced into the next house and are putting fire into the second line of the Mujahideen defence. The outflanked Mujahideen group to their right withdraw and attempt to assault, but lose their nerve and keep running across the road and towards their main line of resistance. Airborne move to edge of wood. At this stage, concerted firepower has driven the other Airborne squad down from the roof of the tower behind them, so they have no support for their advance. Large Mujahideen group congregate on rooftop: this group attracts a lot of fire but strongly resists Soviet attempts to force their way across the road. Bloodied and with no sign of victory, the soviets withdraw to await a better supported attack. What explains this fierce and skillful resistance? A thorough knowledge of the terrain and suspected involvement by Western Special Forces... Skip's buildings look even better in person than in these pictures and I must congratulate the guys down in Kildare for a great setup, remarkable miniatures/terrain, and getting a good bunch of gamers from around the country down for the day of enjoyable gaming. Here's to next time!
Posted by Donogh at 22:35