Sweep and Clear in Phuoc Mei

Piers is working on a new Vietnam supplement for Ambush Alley and Force on Force: "Ambush Valley". He ran his playtest scenario at the Ambush Alley Ireland Day last Saturday. 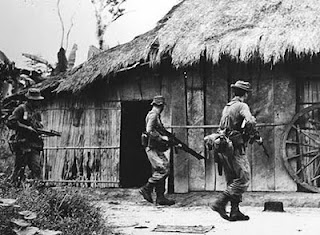 The US force is tasked to search the seemingly peaceful village of Phuoc Mei. The Rules of Engagement forbid targeting civilians or calling in any artillery fire near buildings unless taking fire from them.

(As a player) I know that the VC must move supplies via porter off the table, but unless I split up my force four ways to cover all the roads I know I really have no way of preventing it. I reckon that opening fire on them first thing is definitely unsporting - they appear to be civilians after all! A squad of local force Viet Cong lurk behind one of the larger hooches. 2nd Squad move cautiously along Western Road. In with them is a two-man OP team. 1st Squad advance up Southern Road. Leading them is the platoon command: Lieutenant Vanderbolt, his Radio Operator and the Medic. The VC squad at the far side of the village move into the large hooch overlooking 1st Squad's advance. Joe from 2nd Squad stands on a land mine. The first of the VC's cunning traps hits the US force. With no idea of where the enemy is, but knowing something is going on 1st Squad fan out leaving the road. Land mine causes two serious wounds in 2nd Squad. This is not good! As 2nd Squad advance around the corner, a VC Sniper pops up out of spider hole, but he's gunned down immediately. The OP Team hit by a grenade trap as they line up possible mortar targets inside the village. The Radio Operator is killed outright, but the observer takes over control of the radio. The VC squad driven out of hut and back across the road by 1st Squad, taking heavy casualties. A handful of VC emerge from tunnels east of village. This is just what we need! 2nd Squad advance on the hut, which is occupied by the Viet Cong commander, controlling a machine gun. Just as 1st Squad begins to come to terms with the tactical complexity facing them, a full strength VC squad led by officer comes out of the tunnel next to the Buddha. 2nd Squad have taken heavy casualties, but have wiped out the VC's officer and the machine gun. The VC squad sneaks past monk. This is looking dangerous for 1st Squad. Whoever makes the first mistake in these close environs will surely be in a hurt locker. 2nd Squad takes casualties as it assaults hut in centre of village where three more VC have just appeared - there must be a tunnel leading into it! 1st Squad have moved into a small hut overlooking the Buddha statue but despite their success, there's still signs of activity from the VC officer there. Lieutenant Vanderbolt races around the corner to finish off this dangerous element himself, but is hit from the other side of the village. The Doc puts two rounds from his .45 into the VC officer himself, and turns around to slap the LT back onto his feet! VC Machine Gun pops out of tunnel, but being far from the action makes the decision to go back into the tunnels to try to make it to the hut in the centre of the village 2nd Squad is now approaching... 2nd Squad make it there in time and seal the tunnel with C4. An Aid Station is set up once the hut is cleared and searched. The LT has had no luck in getting a Casevac chopper in, apparently battalion command thought this one would be a piece of cake, which would also explain the lack of mortar support (or could that be my inability to roll 4+ on a D8) Another VC Squad turns up, but it may be too late. The VC Machine Gun team takes fire before it can set up. With five hutches searched and secure, no civilian casualties and 32 confirmed VC kills. The platoon counts this as a victory. But at a high price: 4 KIAs and 8 WIAs, most of them from booby traps. PFC Hogg contemplates the prospect of a BLT Medevac finally arrives (after the game had ended!) Getting buddy out of danger A great game, a narrow victory for the US, and I'm sure a successful supplement in the making. Plus my first order of 20mm ever has gone in to Britannia for some Vietnam stuff!
Posted by Donogh at 22:13