The 'Green Machine Gamers' down in Kildare ran Ambush Alley Ireland Day yesterday.
(See more of their stuff on The Guild here)
Had a blast, and it was great to finally meet, game with and chat with guys I'd been online with. They had three scenarios set up; the quality of the miniatures and terrain was top-notch. This one was run by Cyril. 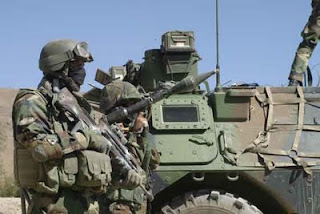 A French column of four APCs has been ambushed by two large groups of Taliban while passing through an valley. The first APC has been hit by an IED, killing the driver and the gunner. The game begins with all the French infantry having debussed (sensibly!).

I played the Taliban on the left hand side of the French column. Our plan was to attempt to react as much as possible to elements at the front and rear of the enemy force, whilst doing enough to interfere with the central elements. With any success there, an option to move down from the slopes of the valley and assault from the rear of the column might present itself.

The rear of the French column is overlooked by a heavy MG on its right and a Taliban team in the compound on its left. The front of the French column started off damaged, but all the other APCs were still mobile and still had their .50 calibre MGs manned. Initially these MGs attempted to suppress our squads, but good and measured reaction fire seriously wounded two of the three gunners. The 2nd French squad takes casualties as it moves out. The French have chosen to move to their right, closing with the Taliban there and taking cover from the significant wooded areas. The sniper team from the first APC looks for targets. We respond to their fire in a devastating manner, killing the shooter outright and seriously wounding the spotter. Heavy MG takes aim along the French column, it will be very effective at punishing French fire-teams in the open. French tail unit's attempt to shoot and scoot ends disastrously. The Taliban unit in the compound scores three kills and a serious wound, only taking one casualty in return. French withdraw towards cover in good order. At this stage, whilst they've taken some serious casualties they look to be in good shape. They've found cover. Have wiped out one Taliban unit and the Taliban MG on their right and look like they'll be able to assault the Taliban unit right in front of them. Despite protection of APCs French casualties continue to mount. The French brought the APCs off the road to act as cover from the fire coming from across the valley. At this stage the Taliban intercept some French radio chatter indicating that they're expecting support soon. French APC and fireteam work their way around Taliban flank, well protected by the trees and in a good position to support an assault up the valley sides. French spearhead takes fire from multiple groups behind them. The last operational APC is knocked out. With burning APC hulk as cover Taliban rush across road to cut off French line of retreat. They have no idea what kind of support is coming, nor how quickly it's coming, so only this group makes the crossing, as it's judged that any other groups might be caught in the open. Tiger aims to wipe unit blocking road back to base, but takes heavy fire from the MG on the other side of the valley ans is forced to withdraw. A spectacular victory for the Taliban. My units only took two casualties - my colleague on the other side of the valley took 11 or 12 (no surprise in the disparity in that since the French chose that side of the valley to close with). That for 23 infantrymen taken down.
Posted by Donogh at 22:02