Raising a Glass to the Year 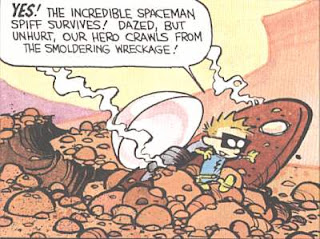 It's been a mixed 2009 in gaming terms. Haven't gotten in half as much gaming as I would have liked but what I have done has been very enjoyable indeed.

Highlights of the Year:

1. Richard Borg as special guest at Leprecon
I ran a big Pacific war scenario for Memoir '44 for Richard Borg's visit to Leprecon. Richard also ran a few demo games of his (then playtest) new Command & Colours
Napoleonics game. Not only does the man design some of my favourite games, he's also a very nice man indeed! Just the kind of wargamer we love playing with and chatting with anyway.

2. Ambush Alley Day in Kildare
Finally got to go down to Kildare for a day full of Ambush Alley gaming with Piers, Cyril, Thomas, Skip. There was also a few lads down from the North and it was great to put some faces to the names. Scenarios, terrain and figures were all top-notch. Looking forward to the next day out!

3. Pulp Adventure Dinosaur Hunting at Gaelcon
Wrote up my own system for this series of games which I ran all weekend at Gaelcon. I reckon I got about 14 people to play this (not counting return customers) and fun was had by all. There shall be another rescue mission launched in March...

An honourable non-wargaming mention goes to my continuing role-playing campaign: The Giyhonan Chronicles, which entered it's ninth installment during the year.

Blogs of the Year:

1. The Wargaming Depot
The centrepiece of the blog this year has been a Napoleonics campaign set in Russia in 1812 using 6mm miniatures
2. Campaigns of General W.A. Pettygree
A truly great story-telling style detailing the exploits on some savage north-west frontier
3. Lonely Gamers
Top notch stuff on a huge variety of topics.

Releases of the Year:

1. Ambush Valley
The Vietnam supplement for Force on Force captures the cinematic (but not Hollywood) effect-based wargaming experience that Ambush Alley epitomises. (This is just out, but otherwise it would have been Force-on-Force anyway)

2. Battlegames
Going from strength to strength over the year, this magazine should be on every wargamer's shelf.

3. Sci-Fi Crusaders
Alternative Armies' Ion Age is back, and the re-release seems to have also spurred people to get rid of their old stuff. These are going to be my mainstay when I run 3:16 Carnage Among the Stars later on

Gamer Movies:
(Only a top-two since I've been to the cinema very little this year)

2. Avatar
Thrilling Cameron effort, if you can stand the (unavoidable) tree-hugging/stilted dialogue

1. Napoleonic Wars in 6mm
Using Richard Borg's Command & Colours
Napoleonics or possibly Piquet's Field of Battle. I start off with the Austrian campaign of 1809

2. Medieval Skirmish in 28mm
Set in fictional Ruritania, this small war will change the face of Europe!

Projects in (slowly but surely) Development:

1. Skirmish Version of Memoir '44
Resurrected the rules for playing Memoir '44 at a skirmish level (where one unit actually represents a fire-team of four guys. Eamon's already done the first session of playtesting.

2. Full Thrust-Dirtside Campaign
First draft of rules are just about finished. Have to do a read-through with Steve to finalise force levels and maps.

1. Tru Blood
Sometimes soapy, but a compelling, well-thought out and (vital in these kinds of things) well-acted show

2. Generation Kill
Short and brutish. But quality all round. Interesting in that it seems to draw on 'One Bullet Away' as well as the 'Generation Kill' it's primarily based on

Though I'll give a honourable mention to the TV show 'Ross Kemp in Afghanistan'. I was dubious, but he's pulled off an extraordinary documentary over two seasons here. Superb and well-worth a look.
Looking forward to The Pacific, by the team which brought you Band of Brothers, and based primiarily on the works of E.B. Sledge (With the Old Breed) and Robert Leckie (Helmet for My Pillow)

1. Confrontation: War with Indonesia, 1962-1966
A largely forgotten war, and when it is remembered it's primarily for SAS involvement. There was so much more

3. Attrition: Aspects of Command in the Peloponnesian War
Approches the war from a command viewpoint; what generals were successful and why