Too Hot to Handle

First off, I reckon an entire force of 3-4 teams of D12s is just too overpowering against this opposition. While we've quite happily used D12s before as part of a larger group, it seemed that (just as Shawn at Ambush Alley Games has warned) a three-step difference is quality means that being lucky just isn't good enough for the irregulars to overcome the regulars. For any future plays of this (and this is reflected in the scenario post) I'm reducing them to D10 Quality, D12 Morale.
It was a case of "Operation Certain Death", but for the Taliban! 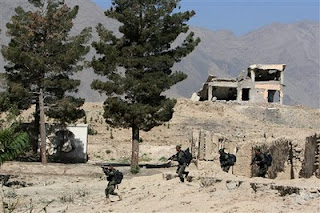 The SAS were split into four teams - 1 four-man fire team, 2 three-man fire teams with a Minimi each and a two-man GPMG weapons team.

The Village before assault begins. Those Taliban groups on the rooftops are really inside, but I placed them there so that no one forgot about them. The GPMG Team sets up on overwatch, which was to prove very useful indeed in early turns in adding firepower to reactions against strong Taliban incursions. Local Goat Herder would have made going through the wadi without being noticed difficult, but as it was the firefight broke out very early. Newly arrived Taliban take fire as they arrive on heights overlooking west side of the village. They take serious casualties from static SAS teams and are down to one man very quickly The lead fire team is under pressure, taking shots from all angles, and while the SAS deal with groups as they pop-up the entire formation becomes less and less effective Taliban patrol in wadi prepares to assault British right flank. They charge through the grove, avoiding the beaten zone of the GPMG team beyond. They even catch the SAS fire team off guard, but their marksmanship lets them down and taking no casualties the SAS return fire to wipe them out As the pressure increases to breaking strain on the SAS, the Taliban patrol which was hunkered down near the hostage location, runs around the corner and up to the wall so that only feet separate them from the lead fire team. The SAS fail to respond with fire, and the close-range firefight results in one British casualty. The return fire puts down two Taliban, including the leader The SAS advance up to the wall en masse, as the second slumbering Taliban group nearby has woken up (I guess they were heavy sleepers!) and begins to react by opening fire. Again the SAS take on all comers, and that SAS casualty turned out to be just a scratch, he's back on his feet in no time. More Taliban reinforcements arrive at the top of the wadi and they line up a shot with an RPG. with the cooperation of the Taliban team in the building opposite, it would seem that the SAS are caught in a deadly crossfire. The British response is just as decisive, wiping out both groups in short order. Having taken some fire from across the compound they also return fire in that direction, but unbeknownst to them they kill one of their extraction targets, the Al Qaeda leader Khalid Azar. A dust storm blows up, downing all air assets and reducing visibility. The storm forces the SAS to exfiltrate on foot [if there had been significant Taliban opposition left, this would have made things very interesting - I would have suggested doing a rolling battlefield and have the SAS exit an extra two feet west of the original LZ] Given this new development the SAS leader decides to ignore the secondary objective and just get the hostages out of there. The breach is unopposed. The night concluded with ZombieLand and Generation Kill...but we will never mention D12s again!
Posted by Donogh at 12:31