An intelligence asset is stuck in a bad neighbourhood and needs to be rescued. He’s being hunted by a local cadre of a Republican Guard unit and a Special Forces team has been sent in to rescue him. 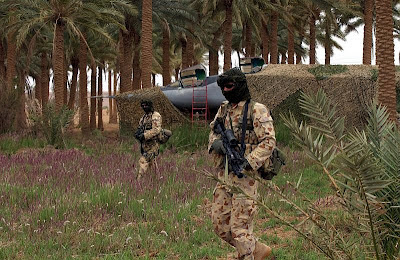 Amongst the quiet open market, three groups of locals congregate - with a few Republican Guard cadres closing in on the informer, the USMC recon team appear The Force Recon Marines throw a bit of a wobbly, just as they've started to engage the Iraqi soldiers, a T-55 rolls into the market square. The Marines don't have any anti-tank capability! The local mobs hurl abuse at the Iraqi soldiers, who have no luck in trying to identify the traitor amongst them. They are taking serious fire from the Marines, despite the attentions of the tank which is now dominating the battlefield (positionally at least) The T-55's engine conks out, but with the tank commander staying buttoned up (he knows there are snipers out there) the Marine rifle team rush across the open ground and take cover behind the large shop. Like some kind of action heroes, they dodge 100mm gun fire and hunker down on the rooftop, shooting up the Iraqi squad trying to quell the angry mob and grabbing the informer They scamper out, and get the informer out! No one can quite believe it - with 3 KIAs and 1 seriously wounded man, and under the gaze of a main battle tank, the Marines snatch a victory from the jaws of defeat!

Off to Hobocon to run my Fear, Honour & Interest campaign tomorrow. Will post the fifth and last scenario from the Road to Basrah campaign on Sunday/Monday when I return...
Posted by Donogh at 21:44