A series of short sharp incursions into administrative centres in the town is being made by armour units backed up by infantry. This drive-by is met with stiff resistance, including a few Iraqi tanks. 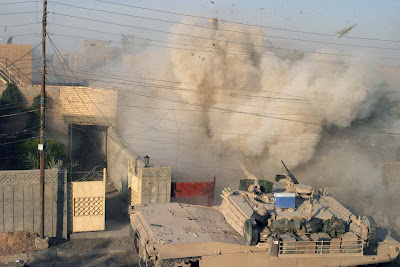 The small punitive column rolls in - its targets are the two Ba'ath party buildings on the opposite side of the square. An Iraqi Sagger team fires at the lead Humvee but misses and the return fire from the top-mounted .50 cal kills the rooftop crew.
Iraqi infantry stay hidden in the buildings to the Humvee's left and await their chance An Iraqi T-72 surges out of the shadows and advances to flank the US vehicles. It targets the Humvee (which accelerates around to the other side of the Abhrams, but the American tank seems well aware of the threat and quickly turn the turret, suppressing the Iraqi crew with a well-placed (if non-penetrating) shot The DShK in the square's small park opens fire on the Humvee, causing it brew up - the crew quickly get out. The Abrahms takes the time to suppress the machine gunners, while advancing into the square and calmly destroying both Ba'ath Party HQ buildings The hide behind the Abrams, but start to take fire from other Iraqi infantry nearby. Another Iraqi T-72 comes out from a side street behind the trees and a three-way tank duel erupts. The Abrahms destroys one T-72 gun, but is unlucky to be knocked out by the other (which is the last shot coming from that T-72 - variant supplied by the lowest bidder) However, if both T-72s thought they could turn back the American attack with their machine-guns and intimdating presence they were wrong.
A second Abrahms rumbles into the square. This party's over!
Posted by Donogh at 22:32