Friendly intelligence assets inside Az Zubayr have alerted coalition forces to the presence of an artillery battery hidden inside the town.
A raid to destroy the guns and capture the battery HQ has been sent in. 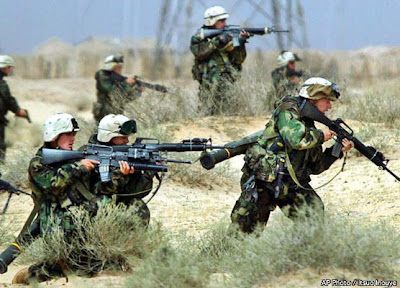 The reinforced squad of Marines move towards the compound where the suspected artillery is located, hugging both sides of the street, the squad leader keeps his GPMG team and the attendant Corpsman in reserve The Marines take command of the rooftops, driving the Iraqi squad back behind the small mosque but coming under fire from a .50cal hidden in the trees just inside the compound wall A second large squad of Iraqis in the palm trees takes heavy fire but holds out against the Marines' advance along the road. As the firefight with the Iraqi .50cal intensifies, it seems that the compound wall is made of plasterboard and the Iraqi defenders go down A technical arrives to help out the Iraqi forces, spewing machinegun fire as it careens down the street The 4x4 doesn't last long, most of the crew is killed as it turns the corner and the engine conks out Crossing the road to set up alongside the compound wall, the leading fireteam triggers an IED, which wounds two men. They take more fire, and wonder why the hell the Iraqis didn't do something about the wall and repair their defensive perimeter! A second fireteam crosses the road only to find themselves confronted point blank with a resurgent .50cal! Despite the scare of their life, they survive the torrent of bullets The Iraqi defence now starts to draw back to protecting the gun, even the HQ personnel and artillery crew have shouldered their AKs Newly arrived on the battlefield are four unusually well-trained Republican Guardsmen. Their position is immediately compromised by a fire in the building and they move across the street. They're engaged by gunfire and the Marines get the drop on them, taking some hits but killing two of the Iraqis The Marines break through the wall to wipe out the crew of the .50cal and the nearby HQ personnel - the fireteam behind them capture the Iraqi officer and begin to move back to interrogate him A close-run affair: 9-8 to the Iraqis who despite their losses held onto the gun - the Marines claim would've surely overrun the position soon though...
[and yes - I know that the Marines are not in the right gear]
Posted by Donogh at 21:59