A small American HQ unit has taken a wrong turn, and the 2nd Lieutenant has his GPS upside down. They need to get out fast before Iraqi forces can cut them off. 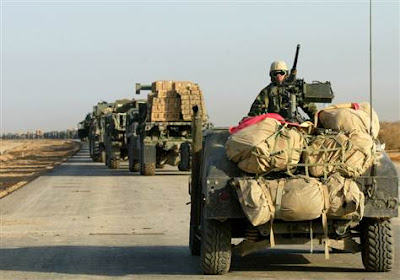 Somehow I forgot to take a picture of the starting board!
An up-armoured Humvee leads the convoy with the HQ Humvee behind that. A HEMMT 8x8 truck and a Cargo Humvee complete the convoy. [Thanks to Mr. E for bringing along the vehicles for this one]

The head of the convoy makes the tight turn to head back to the main road, leading the way, the up-armoured Humvee directs its fire at a squad of Iraqis on a corner rooftop - between the .50cal and a couple of marines leaning out the windows they put paid to them, albeit taking damage to the .50cal The HEMMT's turning circle means it's well behind, and a lurking Iraqi squad behind it open fire. It's a tough truck and it lumbers through the torrent - taking a few shots to the wheels, slowing it down and as it turns the corner one of the crewmen is badly wounded. The Cargo Humvee careens around the corner - a previously unseen AT-3 Sagger team on another rooftop are set up to take a shot, but the Marines shoot one of the crew and the missile goes out of control The Carvo Humvee has almost made it to safety, as the HQ guns through the junction - the Iraqi DShK team take casualties and keep their heads down The Iraqi infantry are moving quickly now, trying to get a bead on the convoy as it passes by buildings. The .50cal mounted on top of the Humvee is destroyed and one of the Marines is wounded - they all bail out and take cover. The bailed out fireteam of Marines tries to cover the truck, but the HEMMT brews up in the firefight. As the Iraqis move in the Marines fight their way off the junction So close for the Marines this time, but in the end the Iraqis clinch this 12-6.
The Marine player thinks the only chance is to get out of the ambush zone as quickly as possible, so maybe another security Humvee would even things up a little?
With two victories for the Iraqis in the morning, what does the afternoon session hold for the Marines...
Posted by Donogh at 21:57