Tension has risen to breaking point at the battle - the workhorses of the Kamfgruppe, the Panzer Mark IVs must break the Russian defences as all of the flashy Tigers and Elefants on the other flank have some way to go to breakthrough the refused Soviet left.

Those few defenders still holding out against the killer elite (we're looking at you #231!) stand fast. Don't mind that brave Ivan running to the rear - he's just popping back to the village to grab his officer a fresh cuppa! The mass German amour are funnelled into the gap, little did they realise that they're in the bulls eye of a Soviet registered target point... As the fiercely effective Nebelwerfer strike hits the T-34 company, tank riders jump off and run for cover inside the trenches ahead. They'll bolster the depleted defenders already inside On the other flank, the last Soviet tank killer ambushes the leading German tanks. It eschews a chance to fire at the Mark III (thankfully its shell missed the SU-152) and concentrates on the Mark IV behind escorting the flame-throwing tank. It immobilises the tank, but is knocked out by the return fire of the stone-cold crew who stick to their guns! The infantry fight on - suppressing another tank that comes into range, but then the Flammpanzer comes into range and wipes out an entire squad - things do not look good for the foremost platoon of Russians... The hordes of Russian tankers burst into action - driving at breakneck pace straight at the clump of Germans ahead. Their fire is effective, mostly suppressing their opponents, they hope to survive any return fire while the flanking moves cull the weakened formation A sad moment for the assembled Russians, the heroic PO-2 is shot down (by some disgruntled and persistent PanzerGrenadier machine-gunners!) The SU-76s, led by some brave T-70s try to hit the German's flank - the light tanks target the German engineers with their machine guns while the mini-tank killers work their angles to some effect The Germans break off the road and spread into the wheatfield to avoid the Soviet artillery and blunt a flanking manoeuvre from the other side. The Borgwards have some effect here, knocking out several T-34s The Soviet nerve centre is under threat - the Gaz truck with quad-Maxims sees off that Stuka again. A bout of confusion leads to one of the Katyushas driving off. The Soviet KV-2 inches forward and takes aim at a German tank in the distance. It misfired and is destroyed in a blazing response from the Tiger ace The three T-34s in reserve nearby surges forward, they has seen a Panzer get ahead of its support and they kill it with some concerted fire. In the following turns though the main German attack at the trenches turns into it and destroyed this spirited local counter-attack On the other side of the battlefield, the close-range tank battle develops. The initial success of the Soviets is destroyed by the uber-efficient German command, and the Russian attack never gets it second wind after this An interesting duel in the wheatfield - we imagine the Russian commander is put off (either by rage or confusion) by his chance to kill the German T-34 with a point-blank flank shot! The German gunner makes no such mistake A Sturmovik drops its bombs in the centre of the ravaged German tank formation, but its' too little to stop their advance and too late. The German commanders take stock - the Russians are broken, but there are still defence lines to overrun With time run out, the Soviets were within a hairs-breadth of their break point. The Germans had taken a bloody nose, but were not is such bad shape in those terms.
However they had not taken any of their objectives. Depending on your point of view this local German victory may have been too slow to have an effect, or the breakthrough's impact might have been toothless given the losses taken. 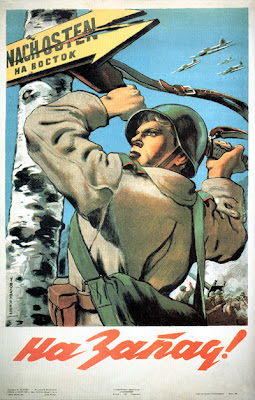 We retired for drinks, post-mortem, some good-natured banter and talk of the next big bash! Many thanks to the guys down in Kildare for hosting and to all the travellers from abroad for making the trip.
Kudos to Piers for running the game, and commiserations that the Hill never got used!
Posted by Donogh at 22:46