With the Germans finally within reach of the most-advanced Soviet units, our resolve would be tested. BUt on the other hand with commanders straining at the leash and the possibility of morale flagging, a decision was made to unleash some of our heavy-hitters 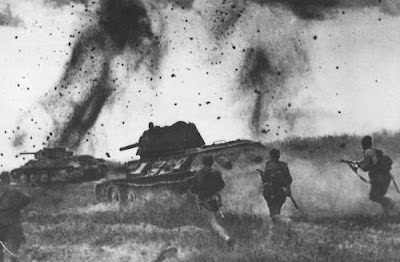 On the left flank, the two SUs in the village rush out to engage the oncoming Panzers. The SU-152 misses entirely, despite the close range, but the SU-122 gets a better result, knocking out one of the Panzer IVs. Both are knocked out in shockingly-routine fashion by their German opponents, who didn't really look worried for an instant! Nearby though the Germans were about to taste some Soviet malice-aforethought. A Russian mortar barrage forces some Panzergrenadiers out of their half-tracks, and they draw the fire of a brave Soviet sniper hidden in the rail station. The pair have kept quiet and hidden as the German Panzers rumbled by. The squad assaults the building, taking several casualties in the process. Across the way with the firefight breaking out, the Platoon HQ scarper into a ruined building. It's booby-trapped but luckily for them they only take one casualty going up the stairs. The Soviet defenders hold firm, as their emplaced guns trade fire with the stalled German advance More Soviet artillery rains down on that German column - a timed barrage of 122mm guns from behind the lines hits those very same German tanks, pinning the entire formation (except for the leading Tiger) and knocking out a Stug This smaller column of Panzers keeps outside the rail line, escorting a flamethrowing tank directly into the Soviet lines of defence! On the other flank, the Soviet armour reserve kicks into gear, T-34s rolls past their dug-in compatriots -70s break off from their larger brethren, advancing up to the village in the centre of the lines Finally, the Germans nerve fails (or at least their common-sense kicks in!) as their advance unit veer away from the anti-tank ditch As the mass T-34s dress the lines just behind the trenches on-call Nebelwerfers from Corps hit them, knocking out one and injuring a few of the tank riders. The German's solve 'registered target point' was aimed at the machine-gun bunker just ahead of them - to be honest the infantry in the trenches alongside got it worst of all On the other flank, the Stuka tries to support the German tank rush (this pilot is possibly the least effective we've ever seen - he's not put in a single attack so far). The Tiger is racking up some kills, everything from a dug-in T-34 to a long-range flank shot on an SU-152 The main Soviet tank reserve in the village (two SU-152s and a KV-2) is severely disrupted as the (stationary!) SU-152 triggers a mine and being destroyed! Back at what we can fairly call the main action now, previous zeroed-in Soviet artillery hits the now-bunched up German advance, knocking out a tank and suppressing several other vehicles German command doesn't seem to be worried - whatever number they lose in the gap, the remainder will be enough to take care of poor Ivan Having done sterling work all day calling in heavy mortars on the Germans, the PO-2 finally gets hit. It's a small miracle that it's survived this far, given the amount of fire being thrown at it (including some scratch PanzerGrenadiers who've given up the advance and are firing their MGs at it!) With the onslaught of Panzers nearly upon them, the Russian infantry (along with an over-confidant wagon carrying ammunition resupply for the SUs) withdraw from the hill and rush back to the main trench lines The Zis-3 on the hill, gives a good account of itself. Despite all the high explosive and artillery being aimed at it, it's still going As the Zis-3 falls silent, the defenders in the trenches wish they had a chance to dig in a bit more. With just a single emplaced gun left now, they only have a few T-34s and a KV-2 sitting in reserve. The SU-152 has gone forward to hide in a copse of trees and ambush the first German tank who rounds that particular corner But the Germans want a five minute break for discussion...
Posted by Donogh at 21:50