I'm going to split up the rest of the game report into several parts, to make it easier for me to write and for you to read. 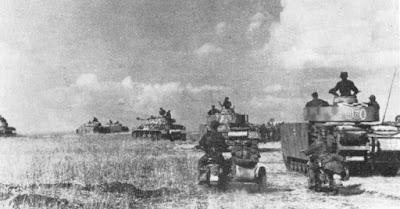 On the German left the initial armoured surge is led by a repainted T-34, we imagine that the crew are very nervous and are more likely to be killed by friendly fire than anything else! On the German right, a scouting Puma pokes it nose out from behind a copse of trees, the local Soviet commanders begin to suspect that it's calling in some heavy bombardments on the defensive lines At the outer limits of the Russian defences a small squad of Razvedchiki are lying up in the central wooded area calling in mortars and everything else they can connect with! The German response is fierce (some one say an inappropriate reaction!) and a battery of 150mm guns is called down on their heads This tiny Panzer rides the coat-tails of its larger cousin A Soviet Il-2 Sturmovik arrives on the scene and tries to knock out a Tiger with its 23mm cannon, but just suppressing the crew It seems like its going to be a field day for ground attack aircraft on both sides when a Stuka swoops in to pick on a parked SU-152, but the efficient Soviet anti-air guns in this area of the battlefield drive the Stuka away On the German left the mass infantry begin what must be a daunting long-range advance on foot, they can't be relishing the machine gun nests or heavy mortars lined up against them A well-timed pre-planned Sturmovik attack picks out some German scouts, including an artillery observer team, but is driven off by the anti-air guns nearby On the other flank, some heavy mortar fire (called in by the PO-2 droning overhead) hits two halftracks, knocking them out and causing serious casualties amongst the Panzer Grenadiers aboard A heavy bombardment of Katyushas hits the massed German infantry, suppressing the guts of two platoons in one feel swoop - thankfully for the Germans the medic isn't overworked by the casualties The first of several 150mm bombardments hits the Russian defences on the German right flank, but the reinforced earthworks protect their charges from harm As the heavy Tigers and Ferdinands advance along the rail line on the German left flank, several Soviet tank killers lurk in the village The emplaced Zis-3 on the hilltop anchoring the Russian left-flank spots the oncoming armour come over the hill off the road, but holds its fire for now More heavy artillery targets the guns - the Soviet local commander has had enough of this messing around... Calling the Sturmovik in from harassing the heavy tanks, it picks on the armoured car (possibly) holding the artillery spotter Tigers pass the new Train Station, little do they know they've entered a well-prepared zone of Soviet defence (with generous dashings of Maskirovka!) Previously unseen Borgwards are given their marching orders, these infernal machines give the Soviet officers pause for thought These Marders, still bearing the early war grey of the campaign in France advance behind some Panzer IVs and infantry The advance on the German left is developing well, though it seems like the Germans will be attempting to cross the anti-tank ditch anchoring the Russian's right flank... As yet, the two armies have been only fencing with each other, relying on artillery and long-range pot-shots. Soviet resolve has been maintained, but can they retain their discipline while spotting any opportunity for an attack?
Posted by Donogh at 15:07