Planning the Defence of Hill 207.5

Given the honour of commanding the defence of Hill 207.5 against the onslaught of the fascist viper, I quickly put my initial thoughts together and consulted with my local commanders, drawing on the technical advice of Colonel Glantz. 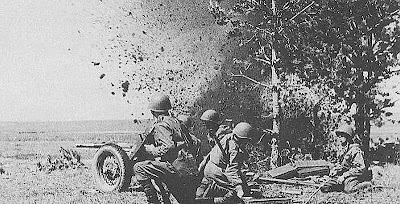 With very little idea of what was going to hit us, our air recon has shown large numbers of German artillery deploying to your front and heavy concentrations of enemy armour. Putting huge efforts in preparing defensive works, our stalwart Soviet soldiers dug trenches, gun pits and anti-tank ditches. Laying minefields and barbed wire to funnel the enemy advance into the sights of our artillery. We zero'ed in some likely avenues of advance, as well as two of the outlying towns. On our right flank was an enormous concentration of defences - a large anti-tank ditch, with a large minefiel surrounding it and backed up with two machine-gun bunkers extended to the large wood alongside the main road. At that bend in the road lay another small minefield and a registered target point for artillery. Out intention was to deny any meaningful advance through those open fields to our right and funnel the attacking German armour into this killing zone - hopefully our artillery would be able to hammer them in the traffic jam! We would utilise those classic Russian virtues: be stoic and patient behind our defensive positions. Using well-timed counterattacks once the time was right, or if they looked like breaking through. No reckless charges would be allowed (bitter experience has taught us those lessons).
On our right, we placed all three of our armoured formations, along with some of our infantry holding the defensive line. On the other side of the river, we essentially refused the flank. Both remaining infantry groups held a strong defensive line, backed up with emplaced heavy guns and some tanks in reserve. As German scouts entered the board their worry grew apparent, clearly the Soviet dispositions had disconcerted them - despite the fact that their air reconnaisance would have shown them our defensive works. On our left flank, serious amounts of heavy armour trundled into view - Ferdinands and Tigers led the charge, though at this range no one would be opening fire for some time - though the presence of a PO-2 scout aircraft (seeming for now like a mere nuisance) would cause them plenty of trouble as they advanced. On the Soviet far left lay a small outlying pocket of resistance. A lone Zis-3 on the hill, backed up by some infantry and our secret weapon: two tank killers lurked behind the village, a SU-122 and a SU-152 would give the German armour some pause In the rear-most line lay that flank's HQ and the heavy mortars which would aim to exact a heavy toll on the advancing forces of fascism! With both sides resolved the victory would surely go to the steadfast Soviets!
Posted by Donogh at 22:19