Most tragic of all was the quick capture of the “frozen berths”, in order for their family to receive a stipend for generations some volunteered for “extended PDF duties” and went into hypersleep to await a crisis. The PDF on rotation put up fierce resistance but after two months regular army resistance ceased. It fell on guerrilla cells hiding in the industrial wasteland of the capital and in the barren “Ironies”. Vast fields of alien grass cultivated for off-world export, but of no nutritional to local wildlife.

This is the story of one such band. 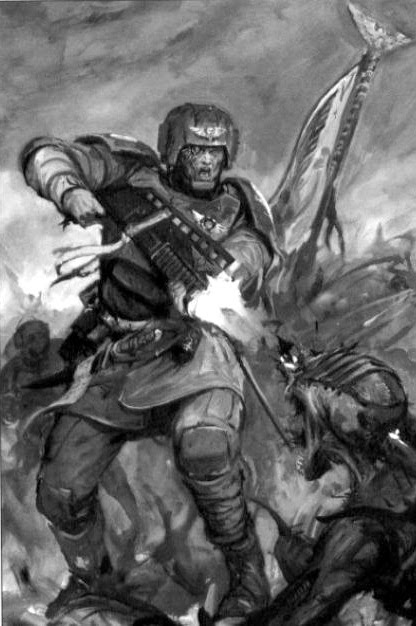 The story starts with the two heroes having been just brought out of hypersleep two years on to fight each other in a duel for the amusement of a group of chaos marauders. These have been tasked by their overlords with rounding up the remainder of the population into camps and fighting the rebels. Our two heroes find themselves disorientated, confused, in an arena holding a sword and  facing each other. Suddenly in the distance the sound of heavy gunfire erupts and all hell breaks loose…

Having picked up some extra equipment from the PDF, Grak and Bruul resolve to raid the facility for heavier weaponry in an attempt to fight back!
Posted by Donogh at 13:09