The Prussian rearguard at Wavre is attacked by a much larger French force. Can it resist for long enough for Blücher to help Wellington defeat Napoleon at Waterloo? 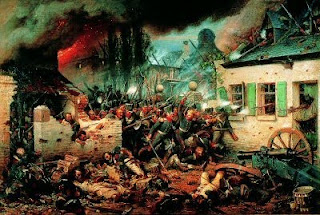 The thick forests help funnel the French advances directly into Limale (second town from the left) and into Wavre (just off to the right of the photo). French columns advance on the bridges at Wavre. A second French column marches towards Bierge Mill, taking this small village will help to control the Wavre crossings. The Prussian centre controls the crossing at Limale, but is able to reinforce either wing easily. The French engage the Prussian garrison at Limale. French cross into Wavre, driving the garrison units back. The Prussians counterattack at Wavre. The French thrown back from Bierge Mill with severe losses, but in the distance the mass French crossing at Wavre can be seen. The Prussian advance into Bierge Mill is outflanked. The French foothold in Wavre is secured. The French cross at Limale once more, this time pushing the Prussians well back. The Prussians retake control of Limale. French hussars catch Prussians in Wavre in the flank, decimate them and drive them back onto the ridge. The French advance beyond Bierge Mill. Stealing a march on the Prussians the French take Limale. Prussians make a last defence of Wavre. A second infantry brigade is destroyed, and the general commanding is forced to take command of the artillery on the heights overlooking Wavre. Long range fire from the French battery across the river gives French lancers the opportunity to destroy the Prussian battery at Limale. Fierce cavalry battle outside Limelette, despite several charges, the outnumbered French hussars hold on until infantry can relieve them and garrison the town. The French hold onto Limelette. Last Prussian charge against French at Wavre bloodies the French but does not change the day's result. Several French units were on their last legs, so despite the French winning well by 5-4 (the French break-point was 7) so a close battle.
Next, maybe Ligny?
Posted by Donogh at 19:02