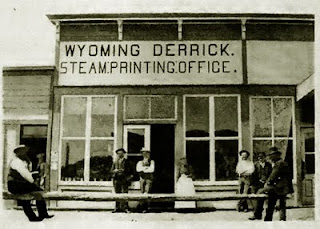 James Wilson Marshal of Caspar discovers that the Pinkertons are holed up at the Widow Compton's farm by Oheke Creek. He grabs his brother Thomas, deputy Jerry McEwan and long-time friend Hank Shelby to go run them out of town. The Pinkertons get word of the raid, and start out from the farm through the scrub towards the cooperage on the creek. Jim McFarland runs ahead, skiring around the high ground and leaving Pete Walsh behind. Seeing a flash in the distance across the creek, White makes a snap shot at Jerry McEwan hitting him in the leg. Taking careful aim, he lets off another few rounds, seriously wounding McEwan, who promptly skedaddles back into town. McFarland leap up like a mountain goat onto the heights overlooking the creek to get a better shot. With a lot of lollygagging going on between the marshals, James Wilson and Hank Shelby finally reach the creek and get ready to cross the stream. Over to their left, Thomas Wilson has crossed the creek successfully and drags himself out, soaking wet but not right beside the cooperage. White and Rucker position themselves behind the barrels, ready to get a good shot at anyone crossing the bridge. White moves around the barrel hut and catches Shelby unawares. He shoots him in the gut. Shelby goes down, for good. Wilson curses and unloads his shotgun at the Pinkerton before running for cover by the old mill. From here Wilson can get a better shot at White but has no luck with either of his shots. With Wilson no longer covering the bridge, Rucker moves up alongside the barrel hut and fans the hammer, emptying his six-gun at Wilson, but missing each time. White takes careful aim at Wilson and puts a round in his chest. Wilson's last act is to wave away his brother, knowing he'll surely die in the crossfire the Pinkertons have set up in the vicinity. Looks like the Pinkertons rule the roost at Caspar, Wyoming. Vanderbolt's plans can be brought forward now...

A few post-mortem thoughts:
If you look at the first photo of the game showing the terrain, the Marshals started just at the top of the setup beyond the rough ground. The Pinkertons started off near the tall grass at the bottom of the setup (in fact you can see their hats if you look closely)
This should have allowed the Marshals to get to and control the bridge and the buildings just beyond before the Pinkertons got to them which would have made the gunfight very interesting. However as the movement cards were drawn the Pinkertons got theirs much earlier than the Marshals did (despite Loughlin's careful poker shuffle). That combined with the Pinkertons having a high agility and being able to move on the 'Greased Lightnin' card mean that getting stuck on the other side of the bridge proved to be terrible for the Marshals.
Combining with this was an initial "heroic moment" shot at long range causing the marshal with the rifle to skedaddle (everyone else was armed with pistols or a shotgun). The Pinkertons then had a definite advantage until the Marshals could close the distance.
With the Marshals split into two definite pairs the skedaddling rifleman was out of range for the leadership check needed to talk him back into the game.
If the Marshals had actually put in some successful shots the fragile Pinkerton morale may have faltered, but as it was the eagle-eye shooting of White accounted for two dead and one seriously wounded marshal.
Posted by Donogh at 15:27