[I've just added some photos of the battlefield setup to this post].
Things have been pretty busy here, preparing for Gaelcon (next weekend), so everything else has taken a back seat. I have been tapping away at this scenario though, and it's set up now. Probably won't get to play it until November though...
It's for Piquet's 2nd edition of its medieval rules set, Band of Brothers. 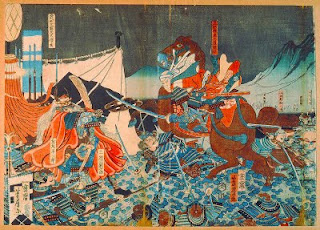 Following the first three largely indecisive campaign, Uesugi Kenshin was determined to destroy Takeda Shingen. He took up a position on Saijoyama, a mountain to the west of, and looking down upon, Shingen's Kaizu castle. The castle contained no more than 150 samurai, and their followers, and he had taken them completely by surprise. However, the general in command of the castle, Kosaka alerted his lord by signal fire, of Kenshin's move.

Shingen approached Kawanakajima on the west bank of the Chikumagawa, keeping the river between him and Saijoyama. Neither army made a move, knowing that victory would require the essential element of surprise. Kansuke, a senior Takeda advisor formed a strategy that he believed would prove decisive.

Kōsaka left Kaizu with 8,000 men, advancing up Saijoyama under cover of night, intending to drive Kenshin's army down to the plain where Takeda Shingen would be waiting with another 8,000 men in a crane's wing formation. However Kenshin guessed Shingen's intentions, and led his own men down to the plain, descending from Saijoyama by its western flanks.

Instead of catching them fleeing Kosaka's dawn attack, Shingen's men found Kenshin's army ready to charge at them out of the fog... 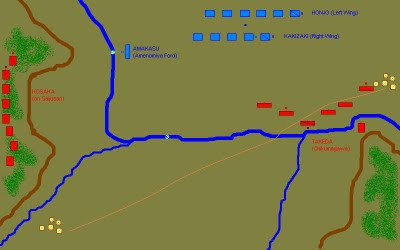