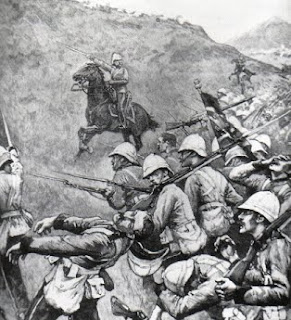 Night Attack on the British Camp:

The British have taken fearful losses during the expedition so far. They have decided to cut their losses and make their way back down river. They set up camp in open ground next to the river, post sentries and prepare to march out at dawn. A Spinosaurus has wandered past and with preternatural speed [during the first turn, on his five cards he managed to move from the starting position to the camp and attack!] it launches itself at Turner, the sentry who has been joined by Simpson who has just woken up. The attack destroys Turner's rifle, and both he and Simpson run for their lives through the camp. Meanwhile two groups of Raptors sneak towards the camp, intent on retrieving their eggs, stolen recently by the British adventurers. Finally all of the British have gotten out of the tents and while they are concentrating their firepower on the Spinosaurus, a second group of Raptors comes into camp from the other side. Chaos ensues but none of the British are harmed and the Spinosaurus is shot dead. Simpson even rushes to help out Turner who's been cornered by a Raptor - cold steel sorts him out! A Raptor sneaks into the third British tent and is retrieving eggs, when there is a curious stand-off between it and Turner holding his pistol. Turner suspects some kind of intelligence in the creature, but Faulkner fears the worst and blows him away with his shotgun, unfortunately also destroying the egg. Mopping up in good order comes next, the British forming a thin Khaki line and destroying every last lizard. Both American and British expeditions are leaving the dangerous highlands, and relief columns have been sent. The British have sent a cavalry column, while the Americans have sent a convoy of vehicles. A pair of Tyrannosaur lie in wait, skulking in the high grasses along one of the main routes to the river crossing. The American convoy ignores the threat and continues at best speed to reach their boys across the river. The convoy has bunched up, as Jorgensen in the lead truck has jumped out to view some grisly remains to attempt to identify them. But as he does Raptors emerge from nearby cover to attack Brown in his touring car. As the touring car skids out of control and the armoured car brings its machine to bear on the Raptors, they race back into the grass. But behind the chaos of the threatened convoy, the two Tyrannosaurs emerge from their hiding place. When suddenly, a Spinosaurus races up to attack Brown, now at the rear of the convoy Miraculously the giant dinosaur is brought down by the luckiest of all shots from Brown as he attempts to start the car up! Meanwhile, the British mounted relief column trots on through the narrow valleys, wary of any danger nearby Simpson has galloped ahead to confer with Porter, and they agree on the plan of action. Raptors have attacked the armoured car en masse, and somehow the fuel tank has exploded, killing the crew and taking the vehicle out of action. The dinosaur converge on the remaining vehicles, and Brown is forced to abandon his car. The nearby truck, holding Bradley has accelerated away, but waits for a moment to allow Brown to jump aboard. The Americans on foot cross at the ford, and the field gun takes up position to start aiming shells at the mass of dinosaurs attacking the convoy. Porter leads the main British column across the river, passing by the relief contingent as it takes up a blocking position. The others can see Simpson considering a sabre charge on the Raptors ahead of them... The American relief column is looking after number one and returns back up a different valley towards their start line at breakneck pace. The British relief contingent dismount, and draw their rifles, forming a firing line and driving the Raptors back into cover. Faulkner, who has been sent ahead to make sure the path is safe, quickly realises that it is not, but he manages to hold out against the attack and sensing no weakness, the Raptor flees. Having secured the rear, the mounted contingent rejoins the main British column and makes its way calmly out of the valley. Simpson is severly injured by a giant snake just as they reach safety, but he is carried out by his trusty native porters. The Americans on foot are attacked by a Tyrannosaur and several Raptors and they panic. The field gun is unable to aid them in their defence. It would seem that their comrades have left them behind... The Dahomey Expeditions have learnt the fate of Dr Gaspard de Chateaubriant, and have returned with marvellous tales of their adventures and even with some proof of their exploits.
But who knows the fate of those left behind...
Posted by Donogh at 22:08