The Hunting Begins in Dahomey 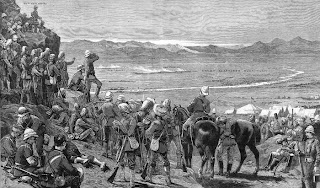 Sibley leads the vehicles in to a series of ravines where his instincts tell him there'll be good hunting. With him is a Lanchester armoured car, surely it'll be of use against these brutish beasts? Hearing sound nearby, but unable to get a good look because of the difficult terrain, Torres leaves his touring car behind in search of the tall Iguanadons. They spot a pair of armoured dinosaurs in the distance, moving silently across a gap in the ravine. Heading to the right of a large copse of trees, the armoured car encounters a fierce opponent, the Tyrannosaur which surges out of the high grass towards it. Torres and Sibley, moving towards the Edmontons on foot avoid a terrifying-looking entangling plant. Behind them, jumping out of his truck, Shearer stumbles upon what look like the remains of Dr. Gaspard de Chateaubriant! (or at least someone with his sword) A herd of mixed Edmontons and Iguanadons move along the ridge line, hidden from danger for the moment. A Triceratops, previously unnoticed by any of the adventurers [literally not noticed by the adventurer player at that side of the board!] storms out of the forest having contemplating ramming the armoured car in the side, but instead running for the ravine. The Tyrannosaur attacks Porter, knocking him to the ground and leaving him concussed and defenceless. Miraculously the Tyrannosaur leaves him alone and moves around the rocky ground to consider the armoured car. Torres scrambles across the ridge to discover the herd of dinosaurs creeping along. The Tyrannosaur charges towards the armoured car, and shudders into it. Trying to bite off the turret doesn't work out so well, taking a belt of machine gun ammo in the throat. Meanwhile the Triceratops ambles up the valley floor, despite rifle fire and eventually scampers to safety. Seeing its dead pack mate, the second Tyrannosaur leaps over the rocks but is grievously wounded as it crosses the open ground. The Americans have taken up position on top of the ridgeline and take the Iguanadon down as well. The Americans have taken an Iguanadon and two Tyrannosaurs today. A fine day of hunting!

Having spotted a series of nests in the badlands, Aylward leads a column with some trusty native porters to attempt to bring back some valuable dinosaur eggs. Raptors have spotted the column approaching and lie in wait amongst the tall grasses. Bailey rides ahead to investigate uneasily, not trusted in his heavy-duty revolver to bring down much of anything. Aylward and MacLeod surround second a second group of Raptors, destroying them without too much trouble while Bailey tries to deal with Pterodactyl The Pterodactyl circles around and shockingly bites Aylward's head clean off. Trusty native porters recover the Pterodactyl eggs having killed the last remaining beasts with their tent poles and make way back to camp, surely to get a extra large bag of shiny beads and a few feet of copper wire for their trouble.