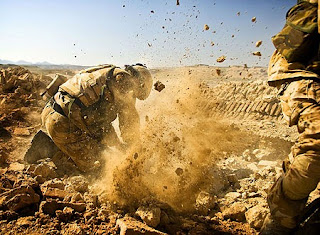 A section with support from a GPMG and a medic race to recover Lt. Wilson's body Huge group of Taliban appears next to the tomb. This is where the British will be heading back to in order to evacuate the casualties They take cover alongside a wall while another group skirt the poppy field to their left. Medic finds Wilson and Cpl. Harris dead (a 1 and a 2 on the first aid rolls) Lone Taliban fighter left after mortar shell lands on position. This group has been unable to push on after their initial surge of activity Taliban pushed back into tomb and then falls back The bodies of Wilson and Harris have been recovered and despite this great loss to the platoon, the British are off to a winning start.

The British took no additional losses and won 6-0 and the insurgency for the rest of the day will be reduced due to the Taliban's failure to have any trophy of their early triumph
Posted by Donogh at 12:20