Senior local Afghans, friendly to ISAF are being held by Taliban forces. The British feel that their position will become untenable if they do not maintain good relations with the local population and rescue the elders. 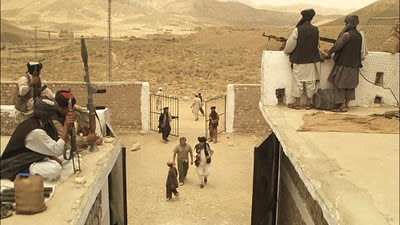 They rush from cover to cover, trying to avoid getting caught in the open Second fire team in support gets hammered by patrolling Taliban - amazingly enough they won the reaction against the Taliban group crossing open ground in the far distance but failed to inflict any casualties on them. The return fire wiped out the four-man fire team and attached medic! The Taliban patrol moves into the second building and avoiding fire from the British, wipes out first fire team too The Taliban leader survives their follow-up assault which kills one and captures the other three. The elder (who has been interrogated succesfully) and the traitorous local guide are executed on the spot. The second sniper team has been hit as well, and attempts at their recovery almost prove tragic (both are found to be dead as well) A game of two halves - initally the British were doing so well, but the ninja-like performance of one of the sentry groups proved their undoing.

The British lost this one a staggering 22-0 and lost four KIA, two WIA and three captured. It has proved a filip for the insurgency and more leaders join the Taliban during the evening.
Posted by Donogh at 21:58