The British actively patrol the village perimeter to keep the Taliban off-balance. Gaining some intelligence of their plans for tomorrow will also help them to hold out. 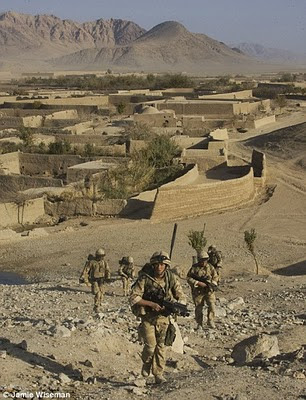 Taliban keen to put RPG in WMIK - somehow the WMIK remained untouched throughout - this movement was well chosen by the Taliban, as it kept out of sight of the British infantry These Taliban are most certainly getting shot! Given the British were missing an entire section at the beginning of this mission from the scenario baseline, I let them raid the larder to get a WMIK. Even so I was impressed with the dividends the steady and methodical approach paid.
A victory 22-3 puts everything back in the balance for the third day. Just three wounded on the British side but it'll still be bare bones of a platoon which takes to the field...
Posted by Donogh at 21:53