After two days of non-stop scenarios, including full terrain changes in between each game (and of course late nights, a few beers and early mornings) I decided not to play the 8th scenario. Another more substantial relief column scenario, the result of which could affect the turn length of the final game.

From six scenarios the Taliban had won three, the British two and a single draw, with the honours shared from the more important third games of each day. I totted up the victory points from the seven scenarios to find that the raw score echoed this impression of a balanced campaign where the Taliban had a slight edge.
The tally was 70-59 to the Taliban.

The final Taliban assault on British positions takes place – can the British hold out until a major force from Qandahar can drive them off? 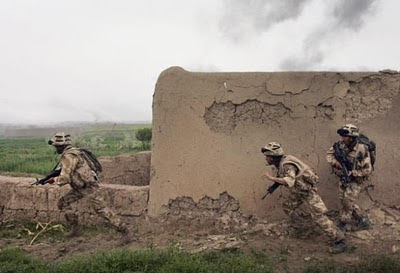 The Taliban close in - an off-board sniper team wreaks havoc on a group, killing its leader outright Javelin team comes out of basement! Their fire helps secure one side of the compound but they are quickly low on ammunition Lone Taliban fighter doesn't realise his group has been wiped out - this large group thought its time had come and rushed the compound, but they were caught in the open and punished. The last man was unimpressed and passed his morale.
At this stage though the British are sorely pressed. But they have one last hope - they finally have artillery on call and their attempts to get into a position where they can call down a fire mission on the large group just outside the compound seals their fate.
The Taliban successfully assault the compound survivng a point-blank Javelin attack! Medic evacuates, putting his pistol to good use to take out the lone Taliban ahead of him (beating him to the draw!) The two soldiers still on their feet follow him out attempting to call in fire on the compound as the Taliban are inside - the "danger close" request fails So a famous victory for the Taliban, overrunning the British compound (in Turn 7) after killing four and seriously wounding eight. And a dark weekend for the British Army.

I suppose in present-day Afghanistan a British platoon taking heavy casualties (including having men taken prisoner) and under such pressure would've had the full force of ISAF including the nearby airfield at its disposal.
As the creator of the campaign I have to ask myself, was the final scenario fair? Should I have allowed the British to top up with more troops for the final battle? If so what use were the previous victories for the Taliban, and what penalty for the lack of concern for casualties by some of British players. I could have allowed it while awarding a certain number of victory points to the Taliban for that fact. In retrospect this might have been the best way to maintain scenario and campaign balance simultaneously.

Thanks for reading. I'll be posting the entire campaign in a pdf when I catch my breath!
To all those who played over the entire weekend - I had a blast and I hope you did too. See you next time
Posted by Donogh at 22:09