A news team shows up with a small escort looking for an interview and some vital background shots. A nearby British section needs to get them the hell out of the area before they're killed or kidnapped. 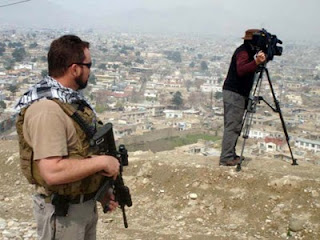 WRI News team and escorting PMC park in the village Goats overlooking ford, with parked Jingle Truck in the background Small group of Taliban are looking to outflank British position But WRI cameraman is well set up to catch it Bikes arrive to pursue retreating PMC - who have unwisely decided to become involved in a firefight with the Taliban. The news team leap into the contractors' SUV while they are still on the rooftop and drive away The news team manage a A1 bootleg to get the truck out of there, as PMC get out on foot The British nick this one despite the Taliban's luck in having their sole VP doubled by the cameraman's lucky roll. The outright winners though are WRI who got two good interviews and caught two significant firefights on camera
A bit of a light scenario in the morning before we move into the climactic battle
Posted by Donogh at 22:05