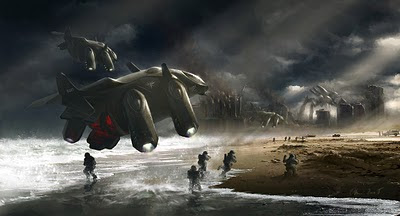 Art by Omen2501
Crew assemble at the crash site, but the rebel forces are closing in. The HCPS patrol drives in over the ridge Sakhan Mercs move through forest towards the industrial complex Light Tank has a commanding view from on top of ridge, and it takes out the anti-armour team with its main gun A firefight erupts as the squad dismounts, with the rebels giving as good as they get A heavy anti-matter round immobilised the IFV causing the crew to bailout (although the platoon commander sticks around and calls in the quick reaction force. With the Light Tank suppressed things do not look good for the government forces! Dropship crew run for it, although two of their number are wounded on the way towards the arriving APC Something comes over the net which indicates that the HCPS will be deploying chemical weapons. The regular forces manage to deploy countermeasures without affecting their performance too badly, but the irregulars suit up and run for it

Bad luck continues for the rebel forces as HCPS nano-dust attacks their drones, taking two of the gunbots out of commission.
Another sniper team is in position - severely hampered by their anti-chem gear they have worked their way around the back of the government forces They've lined up a shot on the VIPs as they board the APC but the light tank takes them out before they can take it. It's main gun fails (equipment made by the lowest bidder!) but its twin machine guns will suffice The armour unit continues it advance towards the Sakhan mercenaries They have no chance in the open and take serious casualties Sakhans take aim at the APC with a light anti-tank weapon (but its better than nothing, right?) The vehicle explodes in spectacular fashion (a Golden BB!) with everyone on board killed The Quick Reaction Force swoops into the complex, aiming to land directly in front of the beleaguered patrol. And close enough to deny the opportunity to capture one of the stricken security guards Discretion the better part of valour - the light infantry escape, but their comrades in the building to their right aren't so lucky The Sakhan mercenaries withdraw, with the rooftop sniper team clipping the patrol's commander hampering any attempts at pursuit. The two VIPs were killed along with the four crew members who survived the crash, when they were seemingly safe and about to be evacuated. The rebels bloodied the government force's nose, but in the end the loss of their irregular troops and the timely arrival of the quick reaction force proved the salvation of the government patrol.
The rebels win 11-9, which is indecisive, but no shame for the rebellion...

My first game of Tomorrow's War - impressive stuff and the changes which have been made to the system are quite effective
Posted by Donogh at 17:43