Here's the first of nine scenarios in the Wilson's Wadi campaign. There are campaign outcomes written into each scenario but they could easily be played as stand-alone games as well.
A link to the full pdf is at the bottom. 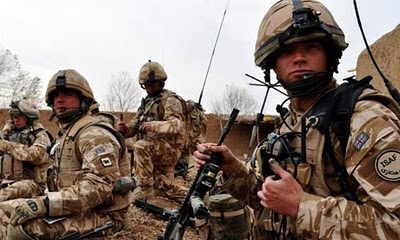 MISSION BRIEF
Lt. Wilson and Cpl. Harris have just been shot whilst investigating a possible enemy sighting at the Wadi. Their status is as yet undetermined and their position well away from friendly forces sparks off a struggle to recover them, alive or dead.

TALIBAN MISSION OBJECTIVE
If alive, capture the enemy soldiers alive, or if dead use them as bait to lure their comrades into danger.

TABLE SET UP
A shallow creek runs through the battlefield, overlooked by high banks. Lush poppy fields along with a few small farming cottages are scattered on the south bank. A small mosque lies further away from the creek. 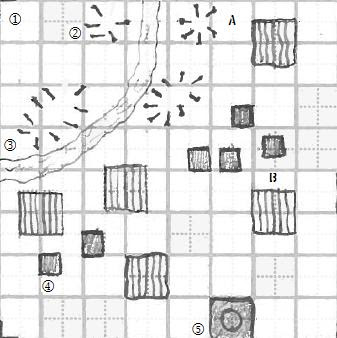 Deploy the British at B, placing the casualties at A
Deploy the Taliban on the Hotspots, with not more than one unit at any location

TALIBAN FORCE COMPOSITION
All Taliban forces are Locals. They have normal supply and have high confidence (TQ D6 Morale D8)
1 Leader (D10 Morale)
3 Groups of 8 (1xRPG, 1 RPK. 6XAKs)
1 Sniper Team (1 Dragunov, 1 AK)
Insurgency level is 3 and a d6 roll must be made lower than 3 to bring forces on to the table. If successful, the Taliban player rolls 2d6 and consults the Reinforcement Table.

SPECIAL RULES
The status of both British casualties at the beginning of the game is unknown. A test may be made as soon as a unit is nearby at the end of the turn.
Roll as usual, but subtract 1 from the roll per turn played.
Lt. Wilson and Cpl. Harris do not count as casualties for Taliban victory points, only if captured.

The full campaign and all nine scenarios are here in a single pdf
Posted by Donogh at 21:34