Sangin has been pummelled in the first major Taliban offensive in ages, though they slipped away at nightfall, intelligence suggests they’ll be back in the morning. A Company of the Royal Gurkha Rifles is sweeping in between the river and the canal to cut off them off when the Taliban spring a surprise of their own… 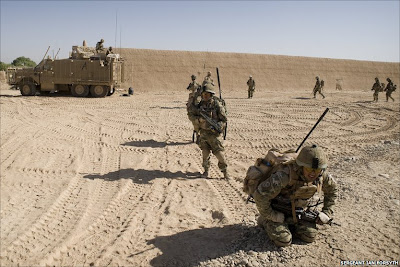 The Taliban occupy the outskirts of Sangin The leading fire team takes fire as it enters the building from the courtyard - the sniper team look on helplessly, they can't draw a bead on the Taliban inside With the compound secured, the Gurkhas cross the irrigation ditch on the right flank With control of the compound, a sniper team is on overwatch backed up by a fireteam on the roof An IED goes off inside, despite the quick-reacting sniper team. The rooftop team scarpered, dragging their wounded man with them Across the way, the leading section pushes through and clears the market Another IED trigger man catches up with the rear party - platoon HQ is organising the evacuation of the seriously wounded. The vigilant fire team on security see off the trigger man's efforts to hit a lucrative concentration Back at the compound the sniper team takes on the goatherd - but thinks better of just shooting him, they take him prisoner instead A clear-cut victory for the British - after seeing the debacle the previous day this was a very disciplined approach by the British player.

We played this again (but no photos) with two complete novices, who showed some good nous and aggression. This time the Taliban came out on top (their player shows an unerring ability to get Fog of War cards!)

I'll post the scenarios here in a few days. Thanks for reading.
Posted by Donogh at 21:37