Battle for the Wadi

As 1 Fury sweep round Musa Qala, taking the high ground in advance of the attack on the town itself, a Troop of the Scots Guards crosses the wadi to prevent any retreat southwards into the Green Zone… 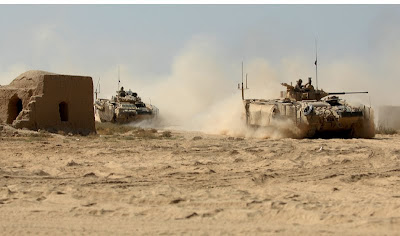 Across the Wadi, Taliban wait guarding the crossing into Musa Qala The Scot Guards exit the wadi to approach the village Around the corner, a Taliban group stands and fights, taking losses but standing its ground to knock out the Warrior's cannon with a well-placed RPG round The section from the lead Warrior has dismounted and climbed up the wadi's banks overlooking the village. The first fireteam descends into the fields. A Taliban group further up the wadi fires everything they have at it and the entire team goes down Their backup on the wadi bank couldn't see those Taliban and follows their mates down, suppressing them when they reach the fields. They hunker down alongside the first fireteam to provide medical attention. A second group of Taliban in the nearby orchard charges out into close assault The British fail to put down any final defensive fire and are completely overrun! A motorbike RPG team rounds the corner and survives a hail of fire to put a round into the remaining warrior - knocking it out as well! This scratch section is left occupying a house but isn't going anywhere. Wow! This one went from pedestrian to nightmarish in a flash. While splitting up the Warriors (with one carrying half the squaddies) from the infantry section seemed risky; it was to take advantage of the infantry's ability to climb the wadi's bank (which the vehicles could not). The Taliban's fire into the first fireteam was highly unlikely to bring them all down, and then the wildly successful assault was a completely surprise.
Posted by Donogh at 21:47