It has been some time since I've posted anything here, a two-week holiday, followed by preparation for Conspiracy last weekend have curtailed my blogging.


I have been doing some playtesting for Ambush Alley Games (but details must remain secret for the moment!)

I did get a game of Command & Colours: Napoleonics in while I was off - a trip to Conrad Kinch's fair abode resulted in the following action:

Retreating towards Torres Vedras, the Duke of Wellington’s army of 25,000 British and the same number of Portuguese halted at Bussaco to make a stand along the crest of Bussaco Ridge and check the advance of Marshal Massena and the French army of Portugal. As Massena’s army of 65,000 approached the British position, he was uncertain of the exact disposition and strength of the enemy, for Wellington had adopted his favorite tactic of hiding his true strength from the enemy by deploying his forces on the reverse slope of the ridge. 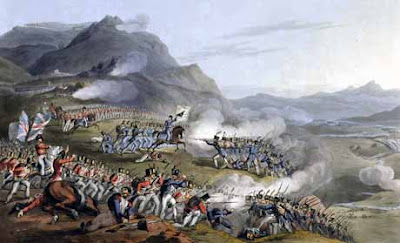 Massana’s army was deployed on the 26th with Ney’s Corps on the right, Junot’s Corps in the centre and Reynier’s Corps on the left. Massena, rather than avoid battle, ordered Major-General Jean Reynier’s II Corps to attack the centre of the ridge, which he mistakenly believed was the British right flank. Once the II Corps attack showed some signs of success, Massena planned to launch Ney’s corps at the British left while Junot’s Corps stood in reserve, ready to exploit.

The French left advances to the stream - this is meant to be a holding action, possibly diverting the attention of Wellington from the main action in the centre but not expecting much. Massed infantry on the French right, preceded by light regiments who plan to disorder the British line opposite Light cavalry occupies town, from here it can pounce on the Portuguese above it, but it failed to notice the battery deployed alongside (an oversight during deployment meant that they weren't placed on the battlefield until now!) The heavy cavalry joins the fray, taking the battery and mounting the hillside - it will later take the place of the Hussars tormenting the Portuguese infantry With some success in using firepower to slow the French attack, the British Dragoons are called into action on the British left and they do drive a French regiment from the field The British cavalry are repulsed and Reynier's assault is successful! Will Ney be able to exploit Reynier's victory?
Posted by Donogh at 13:16