C Company of 40 Commando infiltrates along the Chinah Wadi during darkness. While the Afghan National Army clears Chinah they patrol into Khevalabad, where the forward line of enemy troops (FLET) is reckoned to be. As they move from compound to compound under the brightening sky all they find is empty buildings. Just as they think there will be no engagement, the Taliban open fire from the north and the west… 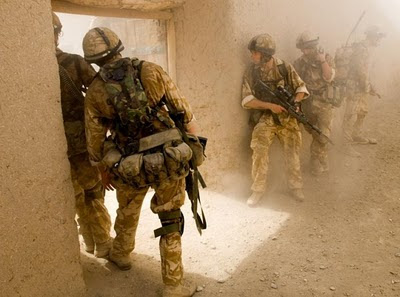 Advance through poppy fields is tense, as there has been no contact with Taliban forces as yet Taliban at top of Wadi rise up to strike at the British, but a fierce sandstorm blows up, preventing all long-range fire Taliban group lurking in alleyway - they are hidden from the view of the British in the fields, but have struck an early blow by seriously wounding one of the roof-top soldiers A costly exchange of fire - while numerous Taliban are brought down, three British soldiers are shot The British clear the large buidling, preventing any interference with the slow extraction of the wounded With the British going firm at the Taliban forward line, a previously unseen civilian sets off a large IED in an alleyway The cost to the British is high, while some success was had in withdrawing early casualties, the effort to reach the Forward Line of Enemy Troops led to overstretch. Not helped by the sandstorm, the British are bloodied by the Taliban ambush.
Posted by Donogh at 21:47