After a botched heliborne assault into Zhawar, a renewed ground assault is directed at Dawri Gar. Meanwhile a flanking column is sent eastwards towards the Moghulgai mountain to try to manoeuvre the Mujahideen out of Zhawar. 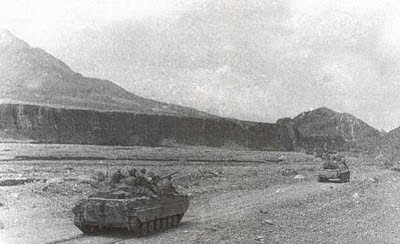 With their BMP-1s and a BRDM-2 (the last one in the recon platoon!) leading they're confidant about the manoeuvre - though the rough ground prevents the vehicles from making best speed. There are some Mujahideen behind the ridgeline. Clambering up the steep ridgeline, the Mujahideen strike to ambush - but a rockfall brings half of the group down before they can open fire - which is ineffective (though scaring the hell out of the Lieutenant) At the lead of the column, a heavy machine gun opens fire, but the BRDM weathers the storm and cuts them down As the BRDM turns right into the river bed a second Mujahideen group climbs the treacherous banks and its fire is deadly - bringing down all four of the fire team in the open.
The Lieutenant's decision to request the Company Medic pays dividends, as all four get back to their feet - quick action sees only one of the soldiers worse for wear! A freak dust storm breaks out and now everything is slowed to a crawl, and visibility is severely reduced.
Backing up the team above them, both BMPs inch forward putting pressure on the Mujahideen group lurking in the small forested area On the other flank, the BRDM suddenly develops a problem with its weapons system, rendering the machine gun ineffective - it still has the heavy machine gun though.
The platoon is making good progress and has a dominant position in the centre of things A mass of Mujahideen arrive from the direction of the mountain but their shot at the BRDM is ruined with the RPG gunner is taken out [ruining the 'Golden BB' card just picked up!] With that the BMPs roll forward with impunity, there's simply no way for the Afghans to see them off. Funnily enough the BRDM develops an electrical fault and becomes a rather static pill box - how is the unlucky crew going to explain that back at HQ! On the left flank the platoon clear the woods and the house, and despite a fierce assault by some new arrivals, takes control of that end of the river bed The Mujahideen's brave effort to separate the infantry from their armoured vehicles come to naught, and to heap insult on injury a full squad of paratroops arrive on the battlefield from an unexpected direction to close down all their options! A tense battle, though one where the Mujahideen were done no favours by their RPG die rolls - they were helped out by the weather though!

Last post for a week at least, so I'll wish you and yours a good holiday (or Merry Christmas and a Happy New Year! to all you traditionalists).
Posted by Donogh at 22:15