While I have you, today is the last day of my contest celebrating this blog's 300th post. It'd be nice if I could roll a die to determine the winner...

Anyway, here's one from the memory stick > a few weeks back I umpired a game of Force on Force, the Top Malo scenario from the main rulebook. 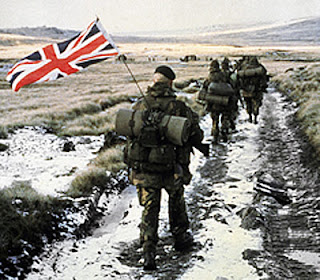 Cold War Warsaw Pact figures are standing in for the Argentines, but no one will hold it against me surely? The defenders are loaded for bear (so to speak!). Surely it can't be wise to put all of one eggs in such a tempting basket, and having neglected to post sentries they can't fault the fox for trying [too many mixed-metaphors, I plead Guilty as charged!] The British set up a GPMG near the woods and open fire, to some good effect Their companions who take the ridgeline, have no such luck. They direct an awful lots of firepower into the house, but come off second best to return fire from the uncowed Argentines Rupert & co. make to the ridgeline to minister to the fallen. Meanwhile, the other element of the flanking force hare across open ground to take cover behind a small hill The command team take cover as the rest of the fire support group continues to take a fearful punishment. The good news is that the house has started to creak and groan under the amount of hits it's taken Indeed, the wrecked house is on fire! The Argentines must get out soon before they are overcome by the smoke The entire house is ablaze now, but the second team makes it to safety Despite taking the house, the British have taken serious casualties (1 KIA and 5 seriously wounded) while failing to capture or prevent the escape of the entire Argentine contingent.
Posted by Donogh at 12:46