The Plastic Soldier Company (in association with Iron Fist Publishing) has released a new games system for re-creating battles around Kursk in 1943 on the Eastern Front. They are written by veteran games designer Warwick Kinrade. 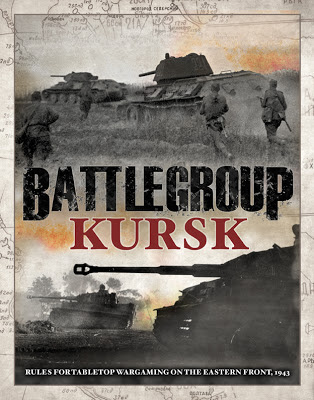 The book – well over 200 pages of colour – is split up into five broad sections:


First off, we get some guiding principles from the author: on style of play (friendly cooperation), measuring distances and line of sight. A few more pointers on what you’ll need to play are include (this one is solely for the novices) along with a very nice view of a battlefield. I think this is the first ‘wow’ moment in the rulebook: most wargamers would travel quite a way to play on a board like that, and tips on how to make such terrain are promised for later. 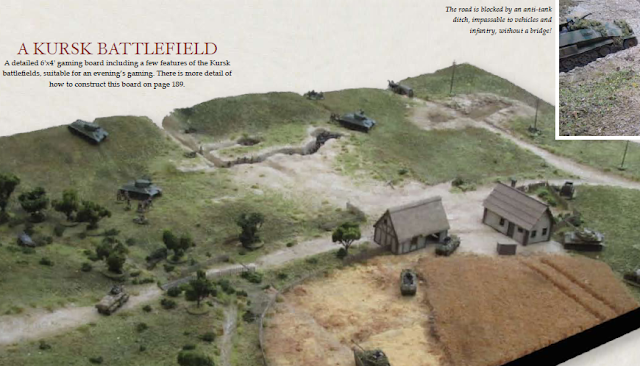 Then we start to get some idea of the structure of the game: army lists, points and battle rating (a factor which will be very important later), a discussion of infantry basing (single or multiple are fine, so long as individual casualties can be recorded), and a brief note on game size (minimum, maximum and typical points for games from platoon to battalion along with the recommended table size for each.

I’m going to give a brief summary of the main parts of the rules along with a bit of analysis of the most important aspects. Pinning and morale play pivotal roles in the game. Supply and communications are also important considerations.

Each turn a commander can issue a certain number of orders (from 1D6 for a squad-level game to 4D6 for a battalion-level game, modified by the number of officers in play). A unit can take one action a turn, a list of orders is available, from straight-forward options like moving and firing, moving at double-rate and so on; to more specialised ones, like resupplying or requesting artillery fire.
Units can also be given a reaction order, which allows them to move or fire during a future turn in response to an opponent’s action.
Senior officers can also attempt to remove a pinned marker from a unit. If a player wants to un-pin multiple units he must draw a battle counter, which allows him to remove D6 pinned markers at the end of the turn.

Movement is fairly simple; infantry move 5” whether off-road or on one, only reducing this when crossing dangerous terrain (like barbed wire or minefields). Other units move further on the road, but most will lose D6” if they cross any obstacle or enter terrain. 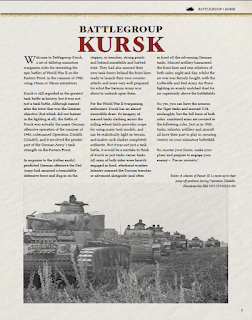 Weapons have a maximum range, varying from 30” for infantry units with rifles to 70” for long-barrelled guns. All fire is made with D6s, and generally speaking a ‘6’ is an effective hit, a ‘1’ an outright miss and anything else a pin.
There are two main choices in the type of fire along with a few special rules:
• Area Fire (for infantry and high explosive shells) – good for pinning the enemy without causing any casualties; it’s even possible at short ranges for a large amount of infantry fire to pin an armoured vehicle. Depending on the amount of cover the unit is in, it might not be pinned.
• Aimed Fire – represents the unit spotting the target and actually hitting them for effect; an observation roll must be made (easier to spot vehicles than infantry, and easier to spot units in the open and firing than those obscured) before rolling to hit. After that the target unit can roll for its cover and then makes a morale test if it’s taken any damage.
• There are rules to differentiate high explosive and armour piercing rounds (weapons have a penetration value and armour a rating – there’s a simple chart for cross-referencing). One old-school curiosity is the necessity to specify what ammunition load each of your tanks has at the start of the game; every time your fire you choose what type of round is being used – once you run out you have to be resupplied from a supply truck.
• There are some further specialised rules for infantry falling back under attack, close assault and even anti-tank grenades. I really like the rules for these, rather than shoe-horn the normal shooting rules into this unique situation, there is a D6 table to determine the effectiveness of the attack. 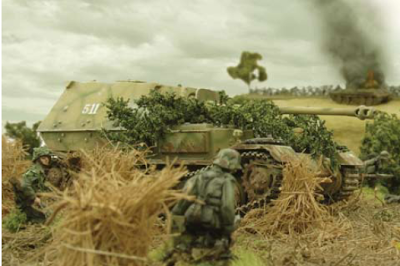 Artillery fire is a little bit more complicated in terms of mechanics, but I think how to treat the big guns is always a problematic aspect of wargaming rules. Because artillery is such a big part of the second world war (causing a majority of ground combat fatalities and wounds), balancing dominance with power is a tough ask.
Scheduled artillery arrive on a specified turn and location with no roll, but otherwise artillery from the ‘Additional Fire Support’ section of the list (representing army-level assets behind the lines) then a priority check must be made. If the roll fails, then HQ has refused your request; if the assets are directly under your battle group’s command you skip this part and go straight to the communications check. If that check is passed, deviation is accounted for and then we roll to see what the artillery effect is.

The rules escape one of the most common pitfalls by inflicting direct hits and pinning hits separately, moving from the centre of the blast area outwards, so that units closest to the epicentre will most likely feel worst off. Hit are applied until there no units or hits left (units can be subjected to multiple hits if there is an excess) so again there’s a decent chance that a significant number of units will be affected.

We get some additional rules for pre-registered target points, timed barrages and counter-battery fire missions, as well as a couple of good examples of artillery in action. We also see a detailed note on Soviet artillery, specifically picking out areas in the army lists where the Soviet flavour is (some are limiting, and some are definite pluses). 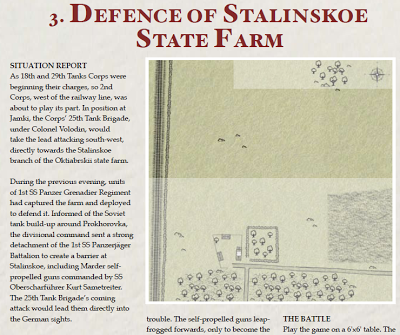 Morale is an important factor in the rules, with two aspects: unit (whether it will stand and fight) and battle group (who wins the battle).

Infantry units test whenever they take losses, but vehicles will take a morale test whenever they’re hit. There’s a chance that crew will abandon their vehicle is they were already pinned, immobilised or near an enemy unit without support. If the unit aces their test, they have a chance to go ‘Beyond the Call of Duty’ and immediately be given an order, even unpinning them if they are already pinned.

There is a mix of battle counters, most numerical (from 1 to 5, but clustering in the middle) but some with special effects. Each time your opponent destroys one of your unit you must draw a battle counter. More counters are drawn the first time your force comes under flame or air attack, whenever a senior officer is destroyed or when your enemy captured an objective. The extra battle counters include air attack, mine strike and others which allow you to strike back against your enemy. So it’s not all bad!

One really interesting feature of the rule (hinted at earlier) is the rally option at the end of each turn. You decide if you want to unpin (1D) unit in return for drawing a battle counter. This forces the player to make an assessment of the danger of his battle group breaking, and how important the currently pinned units are. There’s also an element of risk involved. When the number (hidden from your opponent) on your drawn battle counters exceeds your side’s battle rating, the game is over. 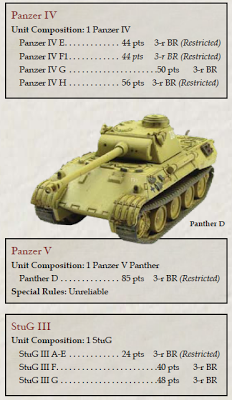 There are a slew of rules for specialised units, from the mundane (medics, artillery spotters, supply trucks) to the peculiar (bomb dogs). A few piqued my interest immediately. Radio trucks, wire teams and dispatch riders help you make those communications check to call in artillery, some give you a simple re-roll, but the dispatch rider gives you an automatic success as he rides off!

Some units are classified as ‘scouts’ whether they be a foot patrol, armoured car or spotter plane. Scouts help you win the initiative during the first turn of the battle and whoever has less scouting units than his opponent takes one battle counter in the first turn.

Also incorporated are rules specifically modelling mass Russian infantry wave attacks and tank assaults, as well as the strict authority of the NKVD.

On first look the four army lists present a bewildering array of choices, but they are carefully structured so that you must purchase some basic units before going on to pick up the more specialist options. For instance, in the German Panzer Division list each standard tank option you pick allows one from the specialist support units; and given that a single Tiger I represents one such specialist unit, you may hobble yourself if you concentrate on non-standard units.

Within these constraints it is possible to pick a highly individual list, so I think this represents a good balance between historical accuracy and player style. Every possible option would seem to be available, from assault pioneers with flamethrowers and panzer aces to mass Katyusha batteries and motorcycle & sidecar combinations.

I’m not going to cover the painting guide or scenarios (I haven’t played them) except to say that they seem to be well chosen. The setups and forces involved varies in terms of size and style so I imagine most gamers interested in the period will be able to pick out one to try straight away.

While some don’t believe it should be a factor in choosing a wargames set, this book is definitely pushing the needle on the eye candy scale – while there are some historical images, the miniature photographs stand out for me, it seems like just about every unit you can field is represented in miniature form in the book.

I have to give these rules a solid thumbs-up: while I’m not crazy about keeping track of ammunition for each tank on the battlefield, the design principles are clear and implementation well-applied. I’m especially impressed with the battle group rating mechanic and trust that we’ll be seeing a lot more radiomen, supply trucks and other oddities on the battlefield due to the rules encouraging their use.
Posted by Donogh at 21:18