3 Para is tasked to secure a compound on the eastern outskirts of Now Zad, believed to be a weapons dump, a possible bomb factory and a safehouse for Taliban commanders.
10 Platoon of the Gurkhas would establish an outer cordon. 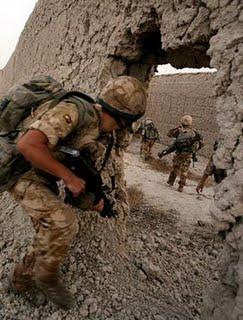 Taliban lurk in ravine, it is from here that the majority of Talilban reinforcements will come The British column, a Warrior IFV (with a section of seven aboard) and a Land Rover WMIK advance past poppy fields, unsuspecting... With Taliban spotted following a parralel course across the poppy fields, the WMIK cuts off the retreating squad and hammers them with some support from the Warrior The section dismounts and takes cover, feeling like they've been pushing their luck inside the Warrior with RPGs around British trade fire with .50 cal in trees. Having killed most the the crew the Taliban heavy weapon withdrew into the grove and stayed there until the Warrior was engaged elsewhere British begin to take casualties as the Warrior struggles to keep tabs on the various threats. The WMIK is hit by an IED as it turns away from the Taliban groups in the ravine. The crew bail out when their main weapon is destroyed Newly arrived Taliban anti-Tank team takes aim at the rear of the Warrior. The British wounded aboard have a lucky escape as the heavy RPG round goes PING! We actually played this twice, early in the morning I played the British and made it through the mission without a single casualty *for shame* though Gar came back for more and the second game between him and Fatz was considerably closer)
Posted by Donogh at 12:19