I had originally intended to change the map for this battle into a more strung-out urban setup, but time became an issue so I just left the terrain as was for the 'Cordon and Search' mission. 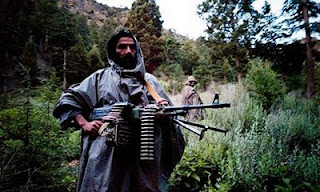 That machine gun at the edge of the woods spots a British section move around a poppy field and quickly train the .50 cal on them. The lead fire-team opens up first, putting down two of the weapons team (although the British commander is heard to mutter that if he'd known it was a .50 cal...)
Their return fire wounds one paratrooper before they can scamper into the poppy field, and supporting fire from the other section silences the machine gun At the outskirts of the town a sniper makes life difficult for the advancing British. He loses his nerve in the first exchange of fire and withdraws to a house further into Now Zad (for the rest of the game his presence is more threatening than effective - his great talent seems to be in remaining hidden, putting a shot on target: not so much!) A large Taliban group, urged on by their leader rush forward into the grove to enfilade any British advance. Cunningly they remain well inside the trees and await their moment To their right, another group has been forced to take refuge inside a house after having been beaten badly in a firefight with the advancing Paras Those Taliban, pinned down by enfilading fire from the poppy fields are assaulted by another fire-team. They run (having made their quality check, at least they can say it wasn't like teenaged girls!).
These gung-ho Paras find themselves in a very nice house, with excellent defensive firing positions! Over on the other side of Now Zad, a leader and his group have had some success at long range, killing and seriously wounding the two members of the GPMG team, but they are hit from several angles and lose four of their own number. They fall back to safety behind the house A Taliban group advances through the scrub to attempt to retake the well-fortified house from the British. In tandem with the group in the grove they should be able to force the Paras out A unarmed UAV comes on station, aiding in the search for the troublesome sniper The Taliban group come through the scrub and take cover behind the courtyard wall, but their fire has no effect on the well-ensconced Paras inside the house Taliban reinforcements run to a rooftop overlooking the same house to join in. The fire from the three different groups has little effect and the Paras inside wipe out the group to their right in the grove The fire-team which has come through the poppy field to advance on Now Zad come running to their mates' aid in the beleaguered farmhouse. They leave behind a serious casualty due to the urgency of the situation They outflank the attack on the farmhouse, wiping out the Taliban group completely. They join the Paras in the previously besieged farmhouse to safeguard that flank, but take some casualties (the squaddies already there have all the good positions taken) Finally the sniper's continual pinging of the farmhouse gives away his position and the Paras' return fire is deadly accurate. They move out to finally clear out the town The leader and his small group have made it across the town and have joined up with the reinforcements there. They've decided to assault the Paras moving into the town to stymie the seemingly inexorable advance. Their assault goes well initially but despite inflicting one serious casualty on them, the Paras' response is swift and fatal. They've wiped out the Taliban resistance and seen to both leaders A tough battle all round, which could've gone either way. First time running a Force-on-Force game. A learning curve to be sure, but not that bad at all, by the second turn of each scenario the players had grasped most of the basics and the general response was good.
Re-read the rule book on Sunday night and had a few "ah!" and "oh yeah" moments! But the rules have definitely come together more clearly in my mind.
Looking forward to the next time...
Posted by Donogh at 22:03