The main British force advances into Now Zad. Their mission is to cordon and search the main buildings. 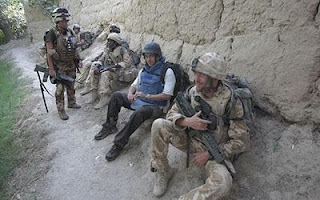 There is a small farmhouse ahead of them, with a path leading through the poppy fields to another house to their left. To their right is the main town. 3 Para's supply situation is less rosy than planned, with much ammunition expended in the initial contacts The Taliban are ready for them, taking cover behind strong high walls in the town, and with reinforcements expected The Taliban keep their position in front of British force, allowing a British fire team to move towards Now Zad, biding their time for a better target As the GPMG team in the centre moves through the scrub to put fire on the farmhouse, the Taliban open up, killing the gunner and pinning his assistant, who grabs the weapon and scuttles back into cover (beside the unseen sniper team) With the Taliban force in the centre coming under fire, the British left flank takes its opportunity to move around the poppy fields in a bid to assault the isolated farm house Back in Now Zad the Taliban have driven a technical up to fire it's .50 cal at the British fire team in the house, but to no avail. But despite their best effort the return fire zips right through the vehicle without doing any damage (indestructible Toyota Hilux I guess!) The British sniper team begins to take its toll on the Taliban, picking its targets with impunity Taliban reinforcements arrive in the central farmhouse to ruin the Para advance on the isolated house. It's also about now that a dust storm blows into town, destroying the British technical superiority and interrupting the newly arrived Forward Air Controller's attempts to bring in close air support to flush the Taliban out.
This dust storm curtails the TV8 news team's plan to head into the town to capture some footage of the operation.. They cause some serious casualties to the British fire team in front of them, forcing them to retreat. The advance in this sector never recovers and due to the Taliban's elevated position, the entire flank is enfiladed and the British do not regain fire superiority A Taliban sniper arrives in the area to turn the table on the British. They see off the British sniper team, killing the spotter and seriously wounded the rifleman. [I've left them on the table, even though it's an off-board asset, with the card underneath so we can remember the rules] The fire-team on the rooftop takes on both Taliban groups in the town, forcing them to dissolve but taking a serious casualty themselves The British section finally totals the Technical (immobilising it and destroying the .50 cal) allowing them to advance to quieten resistance in the town The Paras have taken the town but have been thwarted in their attempt to clear the rest of the area. They've taken significant losses and both Taliban leaders have escaped to fight on
Posted by Donogh at 17:57