The forces of Johannes of Bohemia are arrayed outside the town preparing for an attack on Francesco Savorgnan. 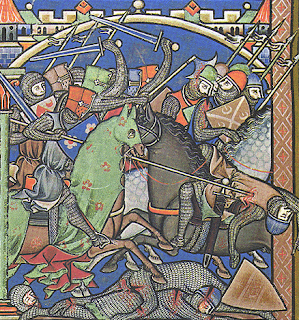 But the wily Italian from Udine has hired a strong band of mercenaries from Brabant and marched through the night to raid the town at dawn. Here the Brabazon crossbowmen advance in a line up to the strong walls surrounding a large field of young wheat William Wittelsbach hurries across footbridge, holding up his men-at-arms as he negotiates the old wooden structure Geoffrey of Brabant's light cavalry race around field. Are they going to head off Meinhard at the ford, or are they just avoiding the heavy foot traffic through the town? They avoid contact at ford and turn into town, perhaps dissuaded by the presence of archers on the hill overlooking the ford Johannes of Bohemia emerges from hiding now that relief has arrived. He begins to back away towards Wittelsbach's men-at-arms Archery from river bank begins to tell on the mercenaries. Over the course of the next few minutes, the infamous Saracen archer Yusuf Edrisi (reputed to be blind) wounds two crossbowmen and two men-at-arms with his accurate shooting A cavalry charge hits home, but one of the knight's timing is off and he doesn't arrive in time to support his fellows Savorgnan's infantry stands fast and repels the knights, wounding two of the horsemen One of the knights is pursued by two infantry, Ulric would have taken one prisoner except he thinks better of sticking around while wounded and continues his flight The grand melee intensifies. with Savorgnan's infantry making in into contact. Wittelsbach sees off three men-at-arms, capturing a soldier on foot and a hobilar. Savorgnan himself is taking on Johannes the Bastard and a brave footmen wielding a voulge, despite the odds he wounds Johannes in the face. Geoffrey of Brabant is taken prisoner by one of Wittelsbach's trusted retainers Johannes of Bohemia is mortally wounded by Francesco Savorgnan who has single-handedly turned the battle. The disheartend forces backing the Bohemian's claims rout, but the pursuit is lacklustre as losses have been high and the dreaded Saracen bowman still holds the ford Alexios Doukas' claim, the Byzantine Knight in Exile, is in the ascendency, but resistance must be stamped out before a new claimant can hold his hand up. A silver must be found to pay the Brabazon mercenaries...
Posted by Donogh at 22:23