The Battle of Marburg

Meeting the Bohemian army besieging the fortress at Marburg, Alexios Doukas presses into action to control the bridges over the river Drava. 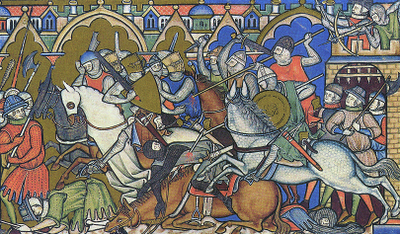 Doukas plans to use his heavy cavalry on the open ground on his left flank and his massed infantry on the right to decide the battle, holding a skirmish line in the centre to prevent any decisive movement of reserves from one side of the river to the other After a slow initial advance, Doukas' massed cavalry charge into the opposing force, doing some serious damage before withdrawing to avoid getting drawn into a close-range struggle in the woods On the other flank the Bohemian infantry advance cautiously, sticking to the wooded hills to stave off any opportunistic attack by the enemy The Bohemians counter-attack in the centre aiming at the holding force in the forest connecting with Doukas' centre. Despite the involvement of heavy infantry and cavalry the attack peters out A fierce infantry engagement breaks out on the right flank, with the lines becoming confused and broken with Doukas gaining the upper hand but with no clear winner The final struggle for victory on the battlefield takes place back on the left flank where the Bohemian heavy infantry is attack by heavy cavalry charging through the woods with a flanking force of Doukas' personal guard. With this decisive attack and when a last valiant effort by the Bohemian infantry on the other flank Doukas' army firmly grasps victory Is there any force now in Ruritania that can block Alexios Doukas' ascent to the throne?
Posted by Donogh at 20:19