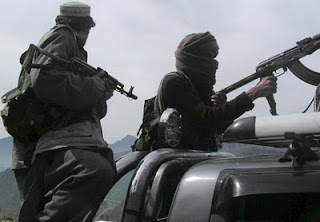 Ambushed by a large force of Taliban and cut off from retreat, an SAS Troop, call-sign 'Dragon' makes for the crumbling remains of an old farmstead, which would provide refuge for the beleagured team. An American CH-57 Chinook, callsign: 'Grim' has been scrambled but will take some time to arrive at the nearest extraction zone.

The British move into the farm compound, it looks suitable as a temporary hold-out. Taliban move to edge of treeline to fire on that team But they come off second best in that exchange A Taliban team moves through field from the west, using the cover to screen it from any interference Meanwhile another team closes in from the northern treeline They take fearful losses, but the GPMG team is down to just the gunner himself The British fire team behind the barricade reacts quickly to give their mates respite, at least temporarily But the GPMG team goes silent after another fusilade The MI6 officer goes down but the return fire wipes out that Taliban squad - this'd better not be serious or the detailed intelligence gained from the mission will be lost... The command team gets inside the compound safely and attempts to get 'Grim' on the radio... Can the troop hold on until their exfiltration?

See the full scenario here
I'll post the remainder of the game tomorrow [now posted: Get to the Chopper!]
Posted by Donogh at 12:12