The Battle of Sahagun

As designed by Mr. Kinch over on Joy and Forgetfulness

As the climax of the Campaign of 1808 approached, the army of General Sir John Moore, 33,000 men strong, was advancing from Salamanca in the general direction of Burgos, intent upon surprising and all being well defeating in detail the dispersed forces of Marshal Soult, and thereafter creating a threat to the vital French lines of communication running from Bayonne through Burgos to Madrid, which Napoleon had recently occupied at the head of his Corps d'Armee. 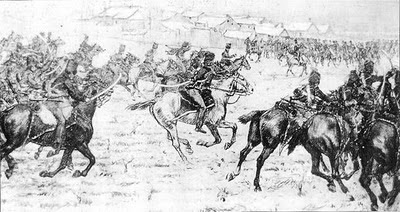 Ahead of Moore's main body moved his screening light cavalry under command of the 40 year-old Henry Paget, Lt. General of Cavalry, who was described at about this time by his younger brother as "always at the head, and in the thick of everything that has been going on. He is, in this respect, quite a boy, and a cornet instead of a Lt General of Cavalry, but in every other he is the right hand of the army."
Some very nice background and accounts of the battle

With the element of surprise fast dissappearing and time running short Lord Paget made a characteristically bold decision and ordered a charge straight into the teeth of the enemy.

Initial skirmishing goes against the British, though they have forced some of the heavy cavalry back into the town Lancers lead by Debelle drive the hussars from the field British sweep towards the ford, and a last ditch attempt by the French to turn the tide fails We played this again, and despite a 'Cavalry Charge' drawn by the British, the French counterattack sweeps the tightly packed British squadrons from the field - the game lasts but a single turn! A nicely balanced scenario, even though the initial handsize of the French has the potential to be disastrous.
Posted by Donogh at 22:31