Battle of the River Coa

After eliminating the garrison at Ciudad Rodrigo, Marshal André Masséna ordered Marshal Ney’s 6th Corps to advance on the fortress of Almeida. Rather than retreat and cross the river as ordered by Wellington, Crauford courted disaster and chose to hold his bridgehead. Crauford and the French both wanted to control the narrow stone bridge which was the only way to cross the Côa for several miles. 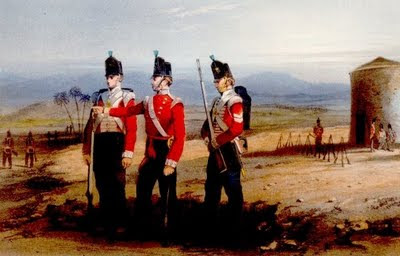 Putting the "fighting" into a fighting defence French hussars sweep around the British left flank to attack, the Rifles there have moved forward into the mill The first French attack in the centre is repulsed, even the presence of Lolson cannot keep the French advancing The French hussars' further attack seems ill-judged as Anson leads the cavalry forward, supported by the Rifles and artillery fire from Almeida. Somehow they survive the onslaught! The second wave of the French assault, concentrating on the hill and leaving the redoubts at the bridge to their left flank Without being broken, this attack is forced back again, with some casualties A concentrated effort on the redoubts has little effect, beyond prompting a limited British counter-attack The British counter-attack on the left is a success The British withdraw in good order, Crauford is lauded in the press! Counting those units which moved across in the last turn (3) the British won this an amazing 9-0!

Great game (and that's not just the heady victory talking!) - christened Mr. Kinch's new gaming table, good company and some nice wine to wash it all down
Posted by Donogh at 13:25