Redinha was the second and most successful rearguard action fought during Masséna's retreat from the Lines of Torres Vedras in the spring of 1811. Having held off the British at Pombal on 11 March, Marshal Ney and the French rearguard had retreated to Redinha. Here he took up an apparently vulnerable position, with Mermet's division on a plateau south of the village, and Marchand's division north of the village on the far side of the Ancos River, linked by a narrow bridge... 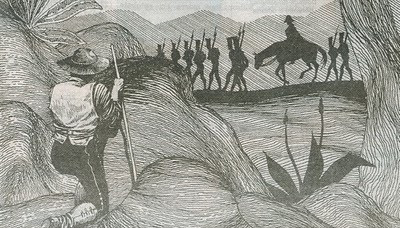 British counterattack pushes back the Swiss, whose performance on this battlefield is best forgotten. Masséna's vow is to make them his mules, or send them to guard the Pope! French flank is turned, and the Highlanders are made of stern stuff as they force an advance The left and right-hand flanks of the battlefield are quiet, as they observe the fierce fighting in the centre A French regiment flees the battlefield - Masséna must withdraw We played the battle again, and this one was much closer; most of the battle was a hotly contested draw, but this time Masséna can blame the Irish light infantry, whose markmanship made him suspect they held some kind regard for Scotsmen!
Posted by Donogh at 22:52