On Tuesday I popped over to Mr. Kinch's for a spot of Command & Colours: Napoleonics. Some nice wine and a spot of port was had, and despite two French defeats at Redinha I enjoyed myself.
I will post a game report once Conrad sorts out the photos...

During a brief lull we discussed what projects he had on the go and it got me to thinking...

I thought I might recap here, if you'll humour me.
I'm dividing them up into two, one group where I am currently painting or lining up miniatures to be painted. The others are projects I am writing up, either campaign, scenarios or rules.

Projects Underway
(on a scale of 1=Currently Painting, 5=In a Box)

1. Heymans & Yamada Corporate Security Force for Tomorrow's War (GZG 25mm Stargrunt)
2. Two platoons, vehicles and extras for next year's Big Guild Game (Various 20mm Moderns)
3. NVA platoon for Force on Force/Ambush Valley (Britannia 20mm)
4. A handful of Eldar who I never got rid of, but now that I'm seeing the In the Name of The Emperor rules I reckon they could be a viable force (GW 28mm 40K)
5. A couple of squads of space marines which will do for 3:16 Carnage Amongst the Stars and 40K Old School (Alternative Armies 28mm Ion Age) 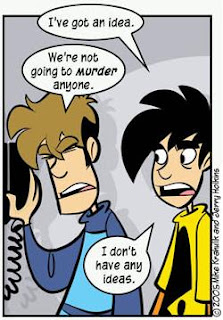 I've got an idea!

All this makes me think I need to serious cull the collection of unpainted lead. I'll get around to cataloguing and photographing it this month for disposal over on a forum or eBay, but if there's anything that catches your eye below, let me know...