2nd Squadron punches through the enemy cordon to cross the border en route to taking control of landing zones to be used later in the day by the 9th Infantry Division. 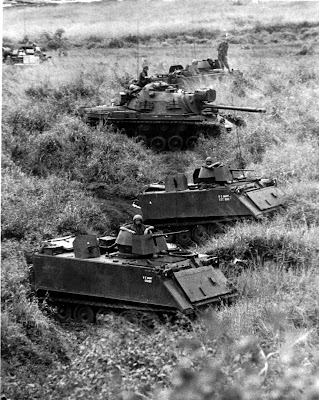 A circling scout helicopter spots a large enemy force on the edge of the clearing. Moving through a small farm, the men of 2nd Squadron spread out Things had looked clear from their vantage point at the farm, but as the jungle erupts with fire, the squadron discovers itself surrounded on three sides Circling the Squadron's other flank are more VC, who exchange fire with the squad. They grab cover at the edge of a paddy field - it's better than nothing! The threat on the right becomes more evident as VC have high-tailed it there from the rest of the battlefield - the Americans lay down suppressive fire with the M60 to buy some time. They'll wait for the Sheridan to wade in With the VC on the defensive, the Americans near the paddy field advance, but one guy stands on a Toe Popper and goes down. With both sides in need of help from the Sheridan, they realise that they're all short-timers and reason with themselves that they can provide covering fire from where they are As the medic rushes to the aid of the squad on the left, they open up on a water buffalo which blunders out of the jungle! Though terribly for the Americans, the LT has discovered a tunnel right beside the farmhouse. While he's preparing a satchel charge, four VC rush out and gun down him and the RTO! Only one of the four survive the fire from the M113 around the corner, but that's no satisfaction to the rest of the troop A VC sniper appears to open fire on the Americans, just as the Sheridan crew go a little loco - maybe it's the sniper fire, but as if this situation wasn't fugazi enough! On the left the medic has seen to the casualties and they're all combat effective. They push through the edge of the jungle and send Victor Charlie packing The M113 crew shut down the tunnel near the farmhouse Things are starting to look up for the Americans, they're taking cover at the edge of the clearing and engaging with the Viet Cong across the way - but with the Sheridan and M113 both on the scene it shouldn't take too long to set them to flight The Sheridan's commander gets hit by concerted fire from the jungle, and the driver loses his nerver and reverses back into the jungle. With the M113 taking bazooka fire from somewhere else, there's no way in hell the Air Cavalry are calling this LZ secure (and that's ignoring the anti-tank mine on the other side of the clearing!).
Posted by Donogh at 21:13