On the Road Again

By early afternoon on the 4th, 2nd Squadron aimed to break out of the jungle and get to the ridge astride the highway. They were tasked to secure the first of three destroyed bridges for engineering units to follow. 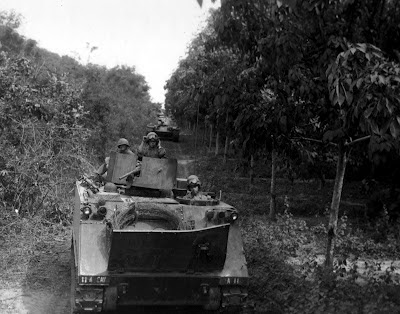 As they move up the trail, the local Viet Cong have other ideas As the American column comes to a bend in the trail, a machine gun in a hidden bunker opens up on the nearby squad As the column begins to orient itself to take care of this threat, another hidden bunker reveals itself straight ahead The squad has been cut down by the murderous crossfire As the ambush appears to be going well, the VC reserve at the highway moves in to support the attack A hidden Bazooka team draws a bead on the Sheridan at the head of the column, but to no avail The American dismounted infantry clears out the second bunker The Sheridan, having just lost its commander to well-aimed gunfire has no chance to defend itself with fire as a VC cell charge in with grenades and sub-machine guns blazing The crew bails out in a panic, but despite having them at their mercy the Viet Cong don't seem able to gun them down as they jump off the tank. The firefight goes on for some time, but despite taking a few hits, the tank crew wipe out the VC to a man (and the tank driver who was hit turned out to have taken a round to hit mess tin!) The crew, bouyed by their success get back into the tank and look for revenge. The next VC cell to arrive on the scene gets the 155mm gun point blank The three armoured vehicles surround the remaining VC - cornred like rats, the VC give as good as they get, and refuse to die. Despite Because that last group of VC barely held on (one guy kept making his 'first aid' checks) the Viet Cong eked out a draw. Seriously, the VC player rolled an ungodly amount of '6's when checking casualties.
Posted by Donogh at 22:40