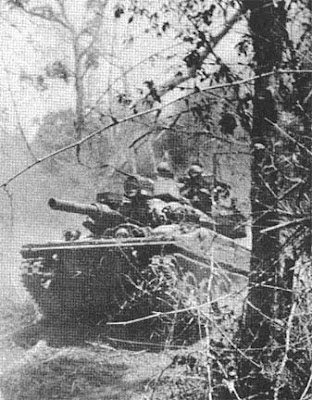 3rd Squadron, moving through the rubber trees to encircle the city, triggered an ambush set to hit the 2nd Squadron as they took the airfield and silenced anti-air guns. Elements of 3rd Squadron move in towards the airstrip Lying in wait for 2nd Squadron is this light machine gun team, hoping to catch the infantry without any armour support Their ACAV surges out of the jungle, leaving its infantry behind. The Viet Cong HQ's security cell, armed with an RPG takes aim and its shot brews up the M113 instantly! The crew bail out, but run directly into the fire from the recoilless rifle in the other house, putting them all down The cavalry rushes to the rescue, but their advance leaves the VC a free hand elsewhere The nearby cell of Viet Cong rush the vehicle crew, taking one prisoner and finishing the rest off - the nearby HQ team is powerless to intervene A close-range firefight erupts nearby, as the ACAV's squad continues along its original line, and is hit by an advancing VC cell On the other side of the airstrip 3rd Squadron halt their advance as they try to suppress the nearby VC group, but the VC fire hits a couple of the top gunners Ignoring their faltering support, the squad rush across the open ground towards the houses Luckily, only one of those wounds seems serious and they continue to the house, where another unpleasant surprise awaits them. Despite having cleared the recoilless rifle team, another batch of VC has climbed up from the hidden tunnel complex below A murderous crossfire wipes out that unfortunate squad. The nearby VC command team runs in and takes a prisoner. As the Sheridan puts the pedal to the metal and advances across the airstrip the RPG gunner takes his best shot. It knocks out the main gun, leaving the hapless tank with just the 7.62 MG to carry the offensive to the VC With two groups of VC now slipping into the jungle with their prisoners, the VC look to continue their advantage, engaging the last remaining American squad to great effect The Sheridan trundles to its aid, but now the VC smell blood and are following in its wake A newly arrived Viet Cong sniper takes up position - as soon anyone gets in or out of that ACAV he'll let them have it! Backing up in a desperate attempt to run over some of the VC and bring its machine gun to bear, the light tank takes a full belt of .50cal through its rear armour and conks out. The crew bail out, but aren't happy about the couple of battle-hardened Viet Cong who lurk in front of them The remaining M113 crew rush out, gunning down several VC with their sub-machine guns, and getting the American soldiers back on their feet and towards the ACAV They may get away, but the overly aggressive actions of the officer will be examined in detail (he'll surely be court-martialled for flagrant disregard of military practice). A bad end for the American squadrons of Task Force Shoemaker.
Posted by Donogh at 21:41