An American contractor has been captured and is being used as an unwilling technical advisor on use of The Package. A small group of elite operators is sent in to rescue him – should the Azeri militia be taught a harsh lesson it would be considered a bonus. 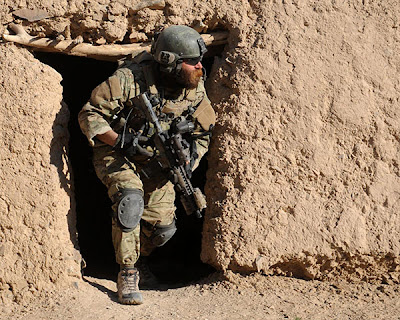 The four-man Delta team moves in, choosing to move along the main street The hostage has been moved recently, so that Delta don't have exact intelligence on which building he's being kept in. All of the Delta operators are casualties in the ensuing firefight, they have dished out an enormous amount of punishment to the Militia units but without anyone nearby to come to their aid it's a major militia victory!

So, after a coffee and some discussion on what went wrong (I reckon that they were used too similarly to what a conventional fireteam would have done (albeit with support). The key to this kind of special operation is to move fast and overwhelm the enemy before they can react.
We set up and go again.

With the Delta team keeping off the main road and rushing up the back alleyway, the militia unit at the far side of the compound takes up position at the corner of the wall near the front gate
As it does so, a heliborne sniper comes on station in support of Delta, but the chopper is sent packing by some brilliant shooting by the GPMG gunner in the militia cell Running towards the compound wall, dusk turns to night and suddenly the militia feel very isolated and vulnerable (Delta have night-vision devices) Militia sentries close in on the Delta position. The men near the front of the compound keep getting back into the fight (Delta suspect that they may be on PCP, or have body armour underneath their fatigues). Radio chatter suggests that a Person of Interest (possibly a new Militia leader or foreign advisor) is also inside the compound The initiative has turned in the militia's favour and Delta are virtually pinned down behind that compound wall. With time running out Delta take the risk of splitting into two-man teams with one breaching the wall and the other giving covering fire Entering the first building they face off against a lone rebel holding the technician hostage. They shot him easily (though the rebel foolishly turned the gun on them rather than the hostage when they rushed through the doorway) Despite the attention of a civilian they bundle into the (pre-arranged) escape vehicle and escape just in the nick of time. The Package is still out their somewhere, but US interference will probably be minimal. Delta didn't have the time to pursue the Person of Interest, but the Azerbaijan military should be able to deal with things from here on.
Posted by Donogh at 21:55