A previous patrol has discovered the hub of an extensive logistical operation. There’s also an opportunity which Divisional Intelligence contends on – the capture of a North Vietnamese high ranking officer. At their insistence an FSV has been attached to the attack. 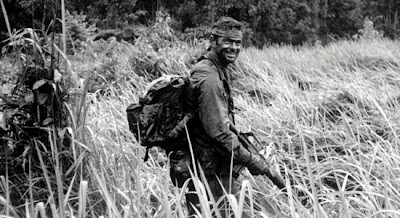 The SAS patrol aren't happy about the presence of the vehicle - it makes their usual modus operandi a bit redundant, but the brass feel that there may be bunkers ahead which will require the heavy firepower. A concelead recoilless rifle on the patrol's right flank target the armour, but doesn't open up on it One VC cadre is on the move, running from the SAS left flank in towards the central trail they are aiming to clear The HQ's security cell moves along cover into the same area At the rear of the patrol, a group of Viet Cong attack the fireteam, but are driven back On the other side of the trail the elite security cell move quickly and team up with the recoilless rifle to attack the FSV - they are shot down as they attempt to get in close (and as the concealed heavy weapons fails to act, again!) With that flank secure, the M113 FSV moves to the other side of the trail but is surprised by this close encounter It tries to back out of trouble, but cannot resist opening fire on the Viet Cong unit's HQ cell off the side trail The large group of VC rush the armoured vehicle and the defensive fire isn't in the silghtest bit effective. The VC are surprisingly capable in the use of SMG fire and grenades and knock out the main gun. The crew have had enough and bail out With the rearguard fireteam rushing to their aid things seem to be turning even worse for the Australians as a previously unseen light machine gun in the jungle opens up. The SAS men are caught off guard and all four go down Rather than get back into their vehicle (which must seem safer now) the crew give first aid to the striken fireteam, getting one back on his feet (who lays about to fearsome effect with his M60!) The other fireteam, despite being ambushed on the way come to their comrades aid, and while they've safeguarded their position and virtually wiped out the Viet Cong in the area they must withdraw with the mission a failure.
Posted by Donogh at 22:20